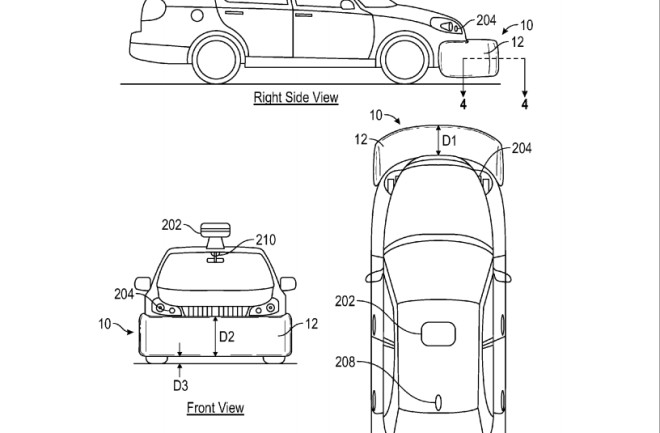 An illustration of from Google's approved patent on pedestrian airbag technology for self-driving cars. Credit: Google / U.S. Patent 8,985,652 B1 Google knows that cuddly car faces may not be enough to get humans to trust their lives with robot cars on the roads. That's why the technology giant's plan for self-driving cars may include external airbags to protect pedestrians in case of an accident. But Google's new patent on pedestrian airbags may reflect more about soothing human fears than actually expecting such airbags to save a significant number of lives in a future filled with driverless vehicles. The Google patent on pedestrian airbags, awarded on March 24, covers a vehicle bumper that includes air sacs capable of stretching and bursting during a collision with a pedestrian. Those actions would help to reduce the impact on any unfortunate person's body and reduce the potential for "spring back" action that could knock the person to the ground and cause additional injury. Such a safety feature could theoretically provide additional safety for people walking around self-driving vehicles, even if there have only been two reported accidents involving Google's prototype self-driving cars, according to Quartz. Pedestrian airbags represent a huge step beyond most car safety measures that have existed up until now. Most car design and technology has usually focused on protecting vehicle drivers and passengers rather than vulnerable, soft-bodied pedestrians walking around. So why the interest in having pedestrian airbags for self-driving cars? Especially when experts believe such computer-controlled vehicles will operate more safely than the average human driver and reduce the number of injuries and deaths from road accidents? The simple answer may be a lack of public trust in self-driving car technology.

Google's self-driving car prototype. Credit: Google A recent survey of 2,276 U.S. adults by The Harris Poll showed that the respondents tended to distrust the safety of self-driving vehicles around other vehicles or pedestrians. About 57 percent said that self-driving vehicles would be dangerous for other drivers nearby. The number of concerned respondents rose to 61 percent for those feeling that self-driving vehicles would be dangerous for pedestrians. The same poll also showed respondents to be divided on the issue of whether self-driving vehicles would be more or less likely to make errors compared with human drivers. On one end of the trust spectrum, 62 percent expected self-driving vehicles to be less error-prone than human drivers when performing parallel parking. On the other end, 57 percent said self-driving cars would be more likely to make mistakes in city-driving situations. Google does not represent the only company looking at pedestrian airbags. Volvo has already introduced its own version of pedestrian airbags on its Volvo V40 hatchback car, a normal family car that still requires a human driver. But in an about-face, Volvo has chosen not to install such airbags on the XC90 SUV scheduled for debut in 2016. It may not even deploy the pedestrian airbags on any future Volvo cars, said Lex Kerssmakers, a senior vice president at Volvo Car Corporation. Instead, Volvo seems confident in emphasizing detection technologies and automatic braking systems for its vehicles to avoid crashing into pedestrians in the first place. "We would rather have the car braking than have it hitting something," Kerssmakers said in an 2013 interview with

Volvo's stance highlights the strange fact that pedestrian airbags are being considered at a time when smart car technologies may already be making such airbags redundant. A number of today's "smart car" models already include automated safety features that Google's self-driving cars would almost certainly have as well. It's also telling that other automakers aren't exactly rushing to put pedestrian airbags on today's cars driven by humans. That discrepancy can probably be most easily explained by how many people are more willing to trust human drivers over robot cars. If Google does choose to deploy pedestrian airbags on its self-driving cars, it would just be one of several measures Google is taking to make the introduction of self-driving cars as smooth as possible. The company has developed its own custom-made self-driving car with an adorable face designed to win over human hearts and minds. And the fact that Google's self-driving car prototype is currently limited to a top speed of 25 miles per hour may not hurt either.