Google's Driverless Cars Are Cruising the Streets of California 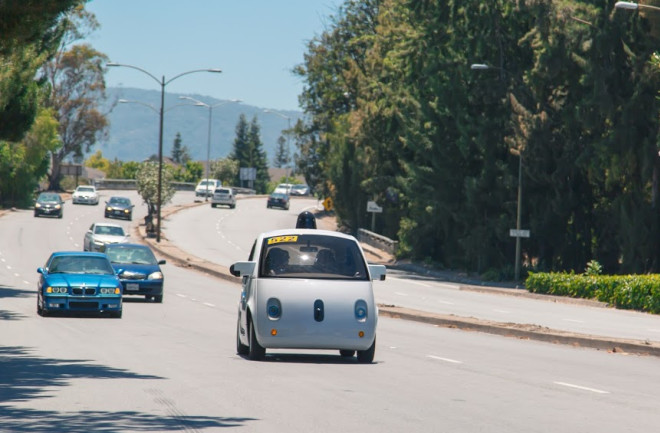 (Credit: Google Self-Driving Car Project) Some say they look like koalas. Others say they’re the smiling face of the future. And if you live in California, you’re already sharing the road with them. Google had told the world that its line of itty-bitty self-driving vehicles was poised to hit the roads in summer. Well, they’re here. Last week, a few prototype vehicles started cruising around Mountain View, Calif., and the folks at Google are eager to see how the public receives them.

Although the self-driving cars are out of the garage and onto the roadways, the “training wheels” are still on. The vehicles are still equipped with a steering wheel, accelerator pedal and brake pedal, and a qualified driver will be there to take over if things go awry. The cars drive conservatively. For instance, their speed is capped at 25 miles per hour. And they pause 1.5 seconds after a stoplight turns green "because many accidents happen during this time."

Ultimately, Google’s self-driving car will someday roll off the assembly line sans steering wheel and pedals. Before that happens, Google will continue gathering data from their Mountain View prototypes to make the cars safer and more reliable. The Google car is equipped with the same software that’s loaded into Google’s self-driving Lexus SUVs, which is the same fleet that has logged over 1 million miles since the company’s self-driving vehicle project began.

Google’s self-driving vehicles have already learned a few lessons about the streets of California — they’ve been involved in more than 10 accidents. However, none of the incidents could be blamed on a glitch in the self-driving software. In every incident, Google’s Lexus SUVs were either idle or moving at less than 5 miles per hour. In other words, human error was to blame — the very thing self-driving cars aim to cure. And humans, being the wild cards we are, still represent a formidable obstacle for Google. Although self-driving algorithms can detect obstacles and stay between the lines, they don’t necessarily have a “human” driving style. Robots, for example, don’t give a “you go first” nod to another driver that reached a four-way stop at the same time. “Self-driving cars may have a ‘better’ driving style but it may not be a human driving style,” Anuj Pradhan, a behavioral scientist at the University of Michigan Transportation Research Institute, told The Guardian Sunday. “And that could affect how we predict or react to them.” To get at that information, Google is encouraging drivers who encounter a self-driving prototype on the roads to share their experiences. In the longer term, the company is looking at bringing their test vehicles to other cities, according to the project's website: "In coming years, we’d like to explore other cities that can teach us about different types of challenging weather and terrain. We’d also like to run small pilot programs with our prototypes to learn what people would like to do with vehicles like these." How would you use a self-driving car? Weigh in in the comments below!