In the war against climate change, carbon dioxide is the enemy. But when used to boost geothermal energy, it can be an ally.

Scientists have known for years that carbon dioxide can be captured from power plants and stored underground to reduce emissions, but the practice is cost-prohibitive without federal incentives. Researchers have now found a way to use carbon dioxide to enhance and expand geothermal energy, which can offset the costs of capturing and storing the gas.

“The goal is to simultaneously sequester carbon dioxide and use it to generate electricity,” says Jeffrey Bielicki, an energy and sustainability researcher at Ohio State University who is part of a team exploring the unusual combo’s power potential. 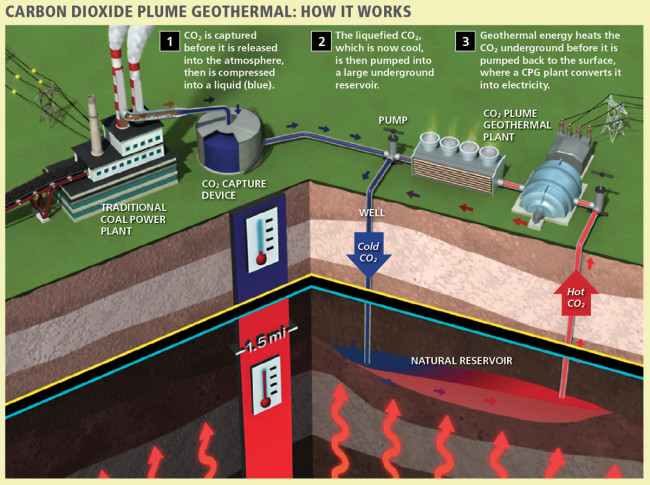 Underground heat is typically mined by pumping water into the earth, then bringing it back up hot to power turbines that generate electricity. But carbon dioxide can outperform water: The greenhouse gas extracts heat about two to four times more efficiently. In a computer simulation, researchers found that compared with an average geothermal plant, a carbon dioxide-fed geothermal plant could produce 10 times more power while also locking away the annual carbon dioxide emissions from as many as three midsize coal-fired power plants.

[This article originally appeared in print as "Geothermal's CO2 Boost."]