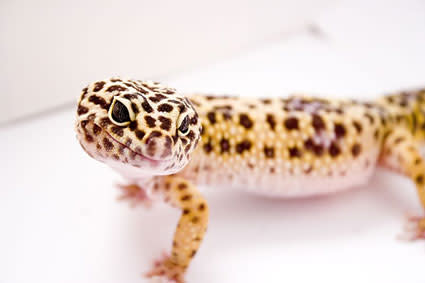 The gecko robot just keeps getting better. Not only can the robot climb up walls like the sticky-toed lizard, but it can automatically right itself while falling. Geckos, like cats and buttered toast, can naturally turn themselves around in midair. Cats are able to right themselves because they are flexible and can twist their bodies around. The gecko, on the other hand, uses its large tail's inertia to twist its body around to the correct orientation, explains Cosmic Log:

Within about a tenth of a second, the geckos flipped their tails around to induce body rotation. Then they spread out their tails as well as their feet into a "belly-down skydiving posture" position to stabilize the fall. All of the geckos that used their tails in this way landed on their feet, even in wind-tunnel tests--while none of the tailless geckos could do the same trick.

Hit the jump for a video of the gecko-bot in action.After studying the gecko's movements, robotics engineers at UC Berkeley were able to create a robot that could do the same tricks. They used the "stickybot

" gecko robot designed by Sangbae Kim at Stanford University, which has sticky feet that allow it to climb up walls. They modified the tail so it could swing around and create inertia, successfully righting the robot as it fell. The researchers published their findings

in the journal Bioinspiration & Biomimetics. Check out the video below for high-speed footage of the gecko free-falling, and a brief demonstration of the gecko-bot in action: But what if you buttered the back of the gecko

Not Exactly Rocket Science: The dance of the disembodied gecko tail

Not Exactly Rocket Science: Geckos use their tails to stop falls and manoeuvre in the air