Reverse-engineering the brain might finally lead to smarter computers

Kwabena Boahen, a lead researcher at the University of Pennsylvania's Neuroengineering Research Laboratory, has a love-hate relationship with the gray matter between his ears. He ardently admires the subtlety of the brain's design: "Very elegant and much more efficient than anything I could come up with," he says. But for an engineer, admiration is not enough; he and his colleagues want to understand the brain's mechanisms and re-create its functions in a lab. In this effort, the elaborate nature of the neuronal programming that transforms electrical currents into thought and perception is a source of endless frustration. "Everyone is banging their heads up against this complexity issue," Boahen says.

The famed mathematician Alan Turing predicted in 1950 that computers would match wits with humans by the end of the century. In the following decades, researchers in the new field of artificial intelligence worked hard to fulfill his prophecy, mostly following a top-down strategy: If we can just write enough code, they reasoned, we can simulate all the functions of the brain. The results have been dismal. Rapid improvements in computer power have yielded nothing resembling a thinking machine that can write music or run a company, much less unlock the secrets of consciousness. Boahen is trying a different solution. Rather than imposing pseudo-smart software on a conventional silicon chip, he is studying the way human neurons are interconnected. Then he hopes to build electronic systems that re-create the results. In short, he is attempting to reverse-engineer the brain from the bottom up.

Robert Noyce, coinventor of the integrated circuit, first suggested that approach in 1984. "In order to understand the brain, we have used the computer as a model for it. Perhaps it is time to reverse this reasoning. To understand where we should go with the computer, we should look to the brain for some clues," he said. Carver Mead, inventor of the very-large-scale integration circuitry used in today's home electronics (see "The Next Photography Revolution" by Eric Levin, page 54), soon took up the challenge and began building simple circuits that mimic the neural connections associated with vision, an effort he called neuromorphic engineering. In 1990 Boahen, then one of Mead's graduate students, joined this effort.

Kwabena Boahen's retinomorphic chip, a silicon device patterned on the human eye, picks out the kinds of features and facial patterns that we use to recognize people and read their emotional state.Photographs by Amy EckertBottom four images courtesy of Kareem Zaghloul.

Much to their surprise, Boahen and his fellow neuromorphic engineers are now discovering that the brain's underlying structure is much simpler than the behaviors, insights, and feelings it incites. That is because our brains, unlike desktop computers, constantly change their own connections to revamp the way they process information. "We now have microscopes that can see individual connections between neurons. They show that the brain can retract connections and make new ones in minutes. The brain deals with complexity by wiring itself up on the fly, based on the activity going on around it," Boahen says. That helps explain how three pounds of neurons, drawing hardly any more power than a night-light, can perform all the operations associated with human thought.

Boahen believes previous attempts at artificial intelligence stumbled because scientists did not take into account this extraordinary built-in flexibility. "In order to deal with complexity, we have to figure out how to make things hook themselves up," he says. His solution is to create chips that can reprogram themselves in response to the information they receive. Like neurons in the brain, they eliminate old connections and create new ones as needed. Unlike the brain, the chips do not literally change their wiring. Instead they rely on a router to sort information and decide which information pathway it should flow through.

The first product from Boahen's lab is a retinomorphic chip, which he is now putting through a battery of simple vision tests. Containing nearly 6,000 photoreceptors and 4,000 synthetic nerve connections, the chip is about one-eighth the size of a human retina. Just as impressive, the chip consumes only 0.06 watt of power, making it roughly three times as efficient as the real thing. A general-purpose digital computer, in contrast, uses a million times more energy per computation as does the human brain. "Building neural prostheses requires us to match the efficiency, not just the performance, of the brain," says Boahen. A retinal chip could be mounted inside an eyeball in a year or two, he says, after engineers solve the remaining challenges of building an efficient human-chip interface and a compact power supply. 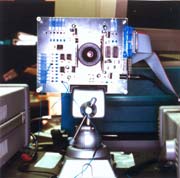 This artificial eye contains working electronic versions of the four types of ganglion cells in the retina. The cumbersome array of electronics and optics surrounds an artificial retina, which is just one-tenth of an inch wide. Photograph by Amy Eckert

Remarkable as an artificial retina might be, it is just a baby step toward the big objective—reverse-engineering the brain's entire ornate structure down to the last dendrite. A thorough simulation would require a minutely detailed neural blueprint of the brain, from brain stem to frontal lobes.

That is exactly what Bruce McCormick, director of Texas A&M University's Brain Networks Laboratory, hopes to create using a novel microscopic camera called the Brain Tissue Scanner. The device slices brain tissue from a mouse using a diamond knife, illuminates it with a laser beam, records an image with a digital camera, and stores the resulting data on a hard drive. The Brain Tissue Scanner can pick up details as tiny as 1/100,000 of an inch, smaller than an individual neuron. All that visual information—about 26 terabytes in the case of the mouse—is then reconstructed to create a high-resolution, three-dimensional model of the brain.

"We can now scan a mouse brain within a month," McCormick says. The human brain is 1,500 times larger than a mouse brain and contains a staggering 100 trillion connections, so the Brain Networks Laboratory faces challenges. His team needs to develop software that can accurately display tremendous volumes of visual information from all angles, inside and out. He aims to progress from mice to people in 2003 and have a road map of the human brain completed within 20 years.

Imaging techniques now make it possible to retrace the electrical workings of the mind. "We've already reverse-engineered about two dozen of the regions of the brain," says artificial-intelligence expert Ray Kurzweil. "We have re-created them in computer software quite accurately."

At Caltech's Human Brain Project, researchers are taking a complementary approach. Russell Jacobs and colleagues are using magnetic resonance imaging and other noninvasive techniques to view deep inside the fetal brains of mice, birds, and monkeys. This effort will not come close to matching the fine resolution of the Texas A&M tissue scanner—at least not at first—but it will add the crucial additional element of time: MRI studies can illustrate how a brain's anatomy and neuronal structure change during development. The long-term goal of the Caltech team is to assemble multiple images of a young animal's brain into one interactive, three-dimensional atlas showing exactly what goes on as the neurons program themselves.

McCormick estimates it will take at least two decades to combine self-switching chips with detailed neuronal maps to create even a very crude copy of the human brain. Ray Kurzweil, an artificial-intelligence researcher, is more optimistic. "I think that within 30 years, probably much sooner, we'll have completely reverse-engineered the human brain and be able to re-create competing systems that emulate it," he says.

Boahen chooses to avoid predictions entirely: "The more you learn about biology, the more humble you become. It engineers things so much better than we do." But he is confident that sooner or later, the engineering approach will realize Turing's vision of an intelligent machine: "I'm a nuts-and-bolts guy. I think if you put enough nuts and bolts together the right way, you'll get it."