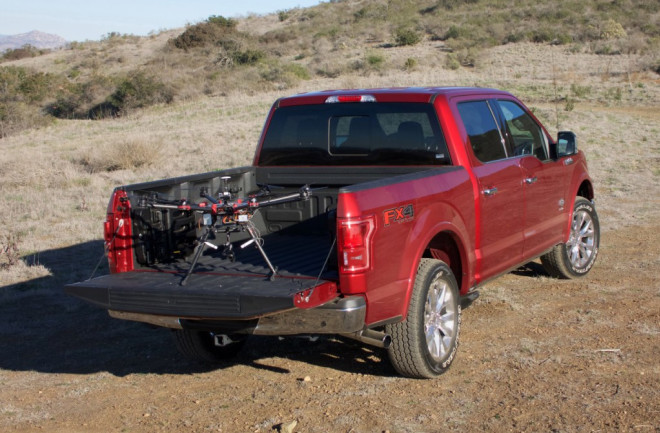 As part of Ford Smart Mobility, Ford is challenging innovators to develop software enabling drone-to-car communications using Ford SYNC® AppLink or OpenXC. The goal is a system that would survey inaccessible emergency zones and communicate findings to an F-150 in real time. Photo credit: Ford Ford and DJI, a top drone manufacturer, have presented the challenge to create a “rapidly deployable surveying system.” The goal is to create a surveying system for the United Nations Development Program that will allow even the most remote areas to be inspected in emergencies, according to Ford. “At Ford, we are driving innovation in every part of our business to help make people’s lives better,” says Ken Washington, Ford vice president, Research and Advanced Engineering. “Working with DJI and the United Nations, there is an opportunity to make a big difference with vehicles and drones working together for a common good.” Ideally, this technology would allow drones to deploy from the cab of an F-150 to survey an area inaccessible to vehicles and unsafe for people . Here’s how it would work:

The only thing missing is the communication technology to connect the drone and the F-150. The two companies challenge developers to help generate necessary software to make this surveying system happen. If creating potentially life-saving software isn’t enough, the winner will receive $100,000. Applications are open until March 10, 2016. To learn more and to join the challenge, click here.