For Authoritarian Regimes, Turning Off the Internet is a Fatal Mistake, Study Says 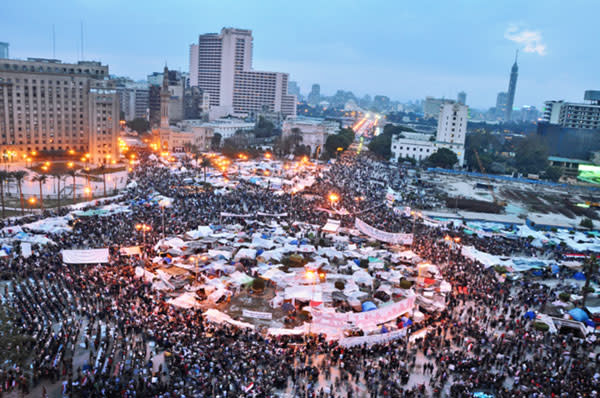 Once the Egyptian government cut the Internet, the protests in Tahrir Square were joined by protests across the country.

What's the News: Social networking has been a star of the Arab Spring revolutions. People can't stop talking about how Twitter and Facebook helped protestors organize

, and when Egyptian president Hosni Mubarak suddenly cut access to the Internet and cell phone service on January 28th, many wondered how the protestors would share information and keep momentum

. But as it turned out, depriving people of information had an explosive effect---far from the epicenter at Tahrir Square in Cairo, so many grassroots protests sprung up that the military was brought in. Two weeks later, Mubarak resigned. Using the Egyptian revolution as a case study, a new paper makes the case that theories of group dynamics explain why access to information can actually have a quenching effect on revolutions

, and argues that regimes that shut information sources down are signing their own death warrants.

Not So Fast: While this paper brings up some interesting points and brings statistics to bear on the problem, it is not a controlled study; ideally, this issue would be probed with a larger data set of similar revolutions, some with shut-downs and some without, to learn the true effects of an information vacuum. Reference: Hassanpour, N. Media Disruption Exacerbates Revolutionary Unrest: Evidence from Mubarak’s Natural Experiment.