Foldable Drone Fits in Your Pocket 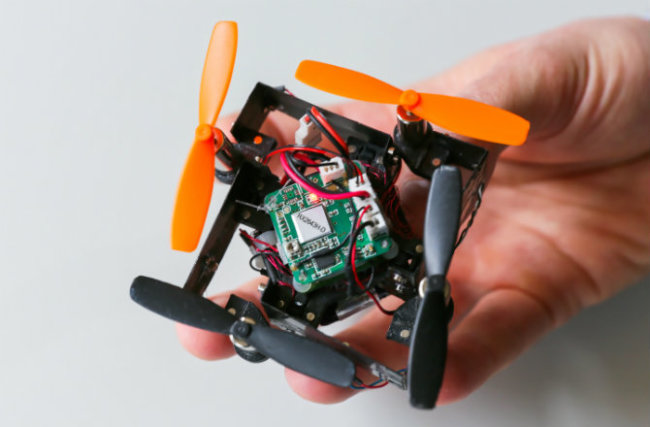 But does it fit in your pocket? This simple question is an oft-used standard to determine the utility of our high-tech devices. What good is a cell phone that doesn’t fit in your pocket? Now, it appears, drones are yet another class of gadget that has achieved the coveted pocket-sized standard of excellence. Researchers at the Swiss Federal Institute of Technology created a minuscule folding quadcopter that can outstretch its arms and get airborne within one second. The entire thing, when folded, fits neatly into the palm of your hand, making it easy to transport and deploy regardless of the situation.

Researchers designed their drone by borrowing a page from origami, which is a hot trend in robotics right now. When folded up, the prop arms form a trapezoid around the drone’s central core. The arms are built with a 0.3-millimeter layer of fiberglass and polyester. Each arm features two vertical folds allowing them to wrap around the core, as well as a horizontal fold to provide stability during flight.

When it’s time for take off, momentum from the drone’s propellers snap the arms out into a traditional quadcopter arrangement, and magnets help keep them locked in place. Here’s the only drawback: You have to manually refold the drone’s arms once its mission is accomplished. Researchers are working on an automated folding mechanism. The foldable design makes it possible to fit a swarm of these drones into a backpack, which is perfect for first responders attempting to get a quick aerial assessment of damage or search for survivors at the scene of a disaster. Miniature drones like these could someday be standard items on an emergency worker’s tool belt. Top image by Alain Herzog