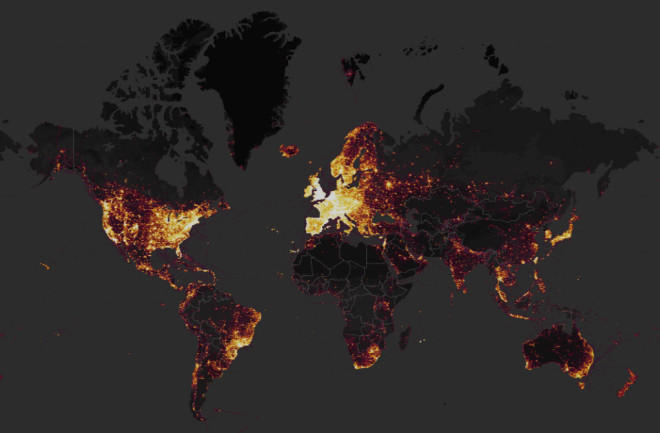 Here's where Strava users workout across the world. Sure, it looks cool from afar, but the trouble starts when you zoom in. (Credit: Screenshot/Strava) Strava is a fitness app that allows users to map their jogging routes, and recently it released a heatmap of where people are getting their fat-burn on around the world—secret military bases included. Oops. Strava released the heatmaps in November, and they showed off the fun side of generating data points while you sweat. But then someone came along and ruined all the fun. An Australian student tweeted that the route maps made United States military bases across the world easily identifiable. The Washington Post released a story early Monday, too.

Strava released their global heatmap. 13 trillion GPS points from their users (turning off data sharing is an option). https://t.co/hA6jcxfBQI … It looks very pretty, but not amazing for Op-Sec. US Bases are clearly identifiable and mappable pic.twitter.com/rBgGnOzasq

In light of this, the US military will be reviewing its guidelines regarding the use of wireless and tech devices, according to The Washington Post. The military has given away Fitbits

, which are compatible with Strava, to members in the past to help them get in shape. The global heatmap contains more than 1 billion activities logged on Strava from 2015 through September 2017. There are more than 3 trillion latitude/longitude points. The data points on the heatmap don't give away any personal information on Strava users, just their routes. Still, that's information that's highly useful in the wrong hands.

In much of the world, this is a cool and useless heatmap showing where people have jogged with their Fitbits. In the Sahel, it is a militant group's dream, lighting up only Western military bases, diplomatic facilities, international hotels, oil compounds. https://t.co/SZFDvd03Lg — Ben Taub (@bentaub91) January 28, 2018