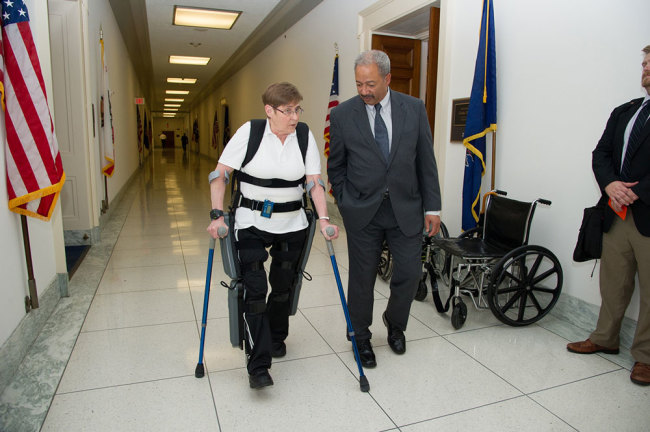 A powered exoskeleton, long an object of fascination for science fiction writers and researchers alike, won federal approval last summer. Now paraplegics can use the device to sit, stand and walk.

The ReWalk first made headlines in 2012 when the device, then experimental, helped a woman with paraplegia complete the London Marathon. On June 26, the FDA gave the go-ahead to market it directly to consumers, and two weeks later, a retired U.S. Army sergeant became the first patient in the U.S. to take one home. A Veterans Affairs official said the agency would pay the $69,500 price tag, but it’s unclear whether private insurers or Medicare will cover the device.

The ReWalk includes a metal brace supporting the legs and upper body; motors at the hips, knees and ankles; and a backpack containing a computer and battery. Buttons on the wrist command the device to sit down, stand up or walk. When activated for walking, a sensor detects when the wearer leans forward and then initiates a step.

The paralyzed creator of ReWalk, mechanical engineer Amit Goffer, will not benefit from his invention, however. He’s a quadriplegic, so he cannot control it. But, he says, “this is only the beginning.” His company is developing similar systems for quadriplegics and those with neurodegenerative illnesses.