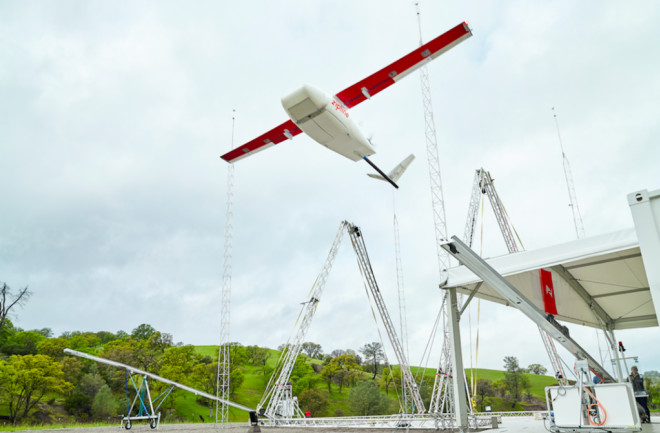 The launch of a Zipline delivery drone that can parachute medical supplies to remote hospitals and clinics. Credit: Zipline Delivery drones can be game changers if they go beyond merely offering convenience to becoming lifesaving technologies on a daily basis. That has already become reality in Rwanda, where a Silicon Valley startup called Zipline uses delivery drones to make timely drop-offs to hospitals and clinics across the country. Now Zipline has begun flying what it describes as the world's fastest commercial delivery drones in its expanding operations that could include the United States by the end of 2018. Zipline drones, nicknamed Zips, resemble small fixed-wing airplanes that swoop in over their delivery zones and drop off supplies by parachute. The latest and fastest Zips fly with a top speed of almost 80 miles per hour and a round trip range of about 99 miles: about four times faster than the typical quadcopter drone and capable of covering a delivery area almost 200 times larger. Rather than carry "smoothies and sneakers," the San Francisco Bay Area startup has remained focused on delivering a growing array of lifesaving medical supplies, said Keller Rinaudo, CEO and co-founder of Zipline. "If we can make instant deliveries to every human on the planet, this is where we should start," Rinaudo said.

The faster, far-ranging delivery drones represent just one part of much bigger changes that Zipline has been making in its redesigned distribution centers and streamlined flight operations. For example, Zipline has automated most of the delivery order processing within each center, the ground flight checks that are required before launching each drone, and air traffic control to handle returning drones. Humans working in the distribution centers need only focus on loading new drones with packages, swapping in fresh batteries and removing drone parts for maintenance based on largely automated decisions and checklists issued by the computer-driven system. Meanwhile, doctors and nurses can remain blissfully unaware of all the moving parts behind the scene as they send orders to Zipline via text message.

A view of disassembled Zipline drones inside a distribution and launch center. Credit: Zipline This "unglamorous" side of the logistics equation is the key to Zipline's overall goal of enabling its Rwandan distribution centers to effectively serve 10 million or more people by putting every hospital and clinic in the country within range of a half hour delivery flight. The latest improvements to both the drones and the distribution centers will reduce the time between receiving a fulfillment order and launching a fulfillment flight from 10 minutes to just one minute. Speedier turnarounds also mean that each distribution center will boost the max number of daily flights from 50 to 500. "There is an entirely new aircraft, but there is also an entirely new distribution center," Rinaudo explained. "We will be able to send products in response to orders faster than any other system in the world."

There Will Be More Than Blood

Since October 2016, Zipline has been operating a distribution center that covers the western half of Rwanda. That lone center has focused on delivery packs of blood products--including plasma and platelets--to 21 hospitals and clinics in western Rwanda. The startup plans for a second distribution center to soon cover the eastern half of Rwanda and effectively put the entire country in range for the delivery drone services. But the new and faster Zips won't be flying just blood packs. Zipline's expanded array of medical supply deliveries could include antivenom used to counteract snake bites, antiretroviral drugs for HIV patients, and rabies prophylaxis treatments for people bitten by dogs or other mammals. "These are not needed frequently enough that it usually makes sense to keep it at every health center, but if patients need it their life depends on it," Rinaudo said.

Boxes of blood product that the delivery drone startup Zipline has been delivering in Rwanda. Credit: Zipline On-demand availability of more medical supplies can help reduce the amount of inventory each hospital or clinic needs to stock while also cutting down on potential waste or spoilage of fragile products such as blood. The current distribution center in the western half of Rwanda has already enabled delivery of 7,000 units of blood over 4,000 flights, including responses to "emergency lifesaving situations" in one third of those flights, according to a Zipline press release.

Zipline May Be Coming to America

The lifesaving potential of Zipline's delivery drone system has the potential to go beyond just Rwanda in Africa. In August 2017, Zipline announced a new deal with the country of Tanzania to launch similar delivery drone operations starting sometime in the first quarter of 2018. The latest improvements to the Zipline drones and distribution center were considered necessary to enabling the start of the Tanzania operation. Zipline could also eventually bring its delivery drones to the United States. The startup has already been in talks with various states about potentially launching commercial delivery drone operations, pending approval by the U.S. Federal Aviation Administration (FAA). If the federal regulators give the green light within the next few months, Zipline expects it could begin U.S. operations before the end of the year. https://www.youtube.com/watch?v=AbqiievcmuI Rinaudo seems keen on maintaining Zipline's lifesaving mission rather than trying to branch out into package deliveries like Amazon or food delivery along the lines of Google's Project Wing. Another delivery drone startup called Flirtey has attempted to cover many potential delivery drone applications by conducting tests of medical supply deliveries alongside partnering with Domino's and the convenience store chain 7-Eleven. Still, the Zipline CEO acknowledged that Zipline's overall delivery drone system could theoretically handle deliveries beyond "high-urgency medical supplies." "If Zipline is successfully delivering blood, that's about as fragile and priceless a product as you can get," Rinaudo said. "If you can successfully deliver blood transfusions, you can deliver anything."