Energy Observer: Around the World on Renewables 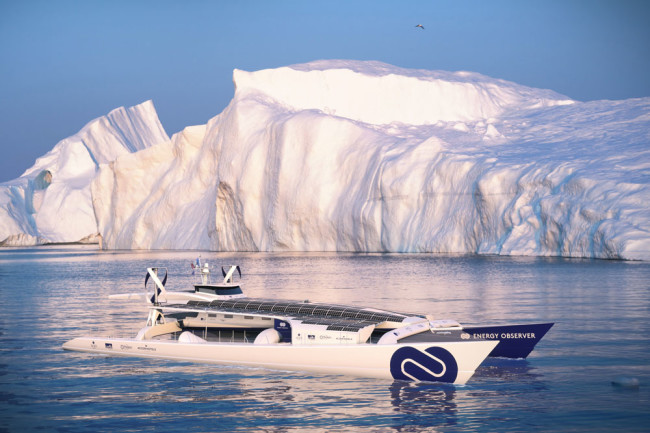 For over two decades, 45-year-old, French documentary maker Jerome Delafosse has been diving into oceans the world over to film marine life, and he's thrilled about his next expedition—above water.

This spring, he will serve as chief explorer aboard the Energy Observer, a boat powered by the sun, wind and hydrogen. In a first-of-its-kind endeavor, Delafosse and his team plan to circumnavigate the globe over six years, visiting 101 ports in 50 countries, while relying entirely on renewable energy sources to reach their destinations.

Delafosse and his compatriot, 37-year-old Victorien Erussard, who is the boat's captain, hope to renew the legend of this 30-meter-long, 13-meter-wide catamaran, which was

built in 1982 and named Formule Tag. It won the Trophéé Jules Vernes for the team Enza New Zealand skippered by Sir Peter Blake. Currently, it's being equipped with its new energy systems in the northwestern French port of Saint Malo.

“It was then the biggest catamaran of all time. Sir Blake was also a sailor committed to environmental issues. So we are proud to navigate this boat. The Energy Observer team decided to give this legendary boat a new life. And now, we hope to build another legend around this boat,” Delafosse says.

CEA-Liten, a French research institute that focuses on renewables, developed Energy Observer’s power system from scratch. The primary source of power is the array of solar panels that occupy most of its surface. 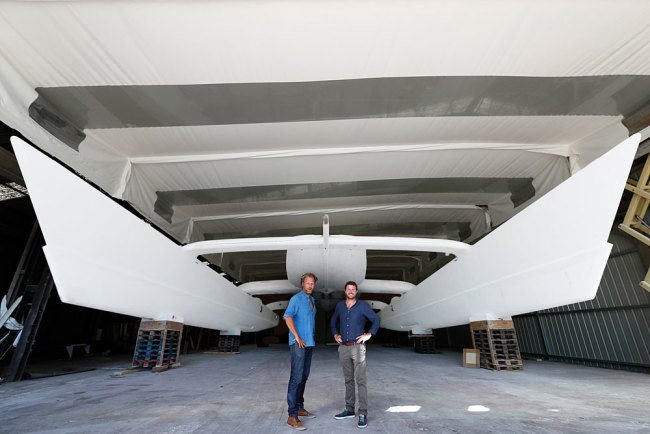 “The solar panels had to be specially designed by CEA-Liten for this peculiar application,” says Didier Bouix of CEA-Liten. “Sailors are always walking on the roof where solar panels are fitted. As a result, you have to use an anti-slip surface. The other part is the management of the electricity from the right and left side of the boat which is not the same.”

Unlike classical solar cells, where there is a metallic plate at the bottom to collect electrons and where only one face is active, the solar cells aboard the boat use metallic strings for the same purpose and get benefit of bifacial cells. According to Bouix, this improves efficiency and will increase the power generated by a factor of 25 percent.

The boat is also equipped with a kite sail that serves a dual purpose of assisting in navigation and generating power. The sail will be used during long voyages, like crossing the Atlantic Ocean, or when there’s wind at high altitude. When in navigation mode, the sail tugs the boat and converts the mechanical energy of the propeller into electrical energy—between 2 to 4 kW of power. 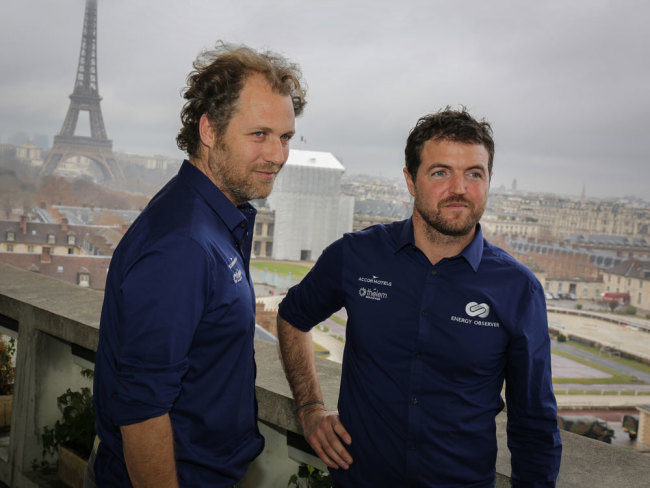 The boat also features two vertical wind turbines that will produce around 3 kW of power, which is 1/10th of the power needed for the two electrical motors. Each turbine is 2 meters high and has been developed specifically for this boat.

“It is the first time that we will have such turbines on dynamic support,” says Delafosse.

The final, and perhaps most striking, power source on the boat is an electrolyzer that will extract hydrogen from sea water. Sea water is first desalinated through the process of reverse osmosis. Then, the purified water is fed into a solar-powered electrolyzer, which splits water molecules into hydrogen and oxygen through electrolysis.

The fuel cell uses a proton exchange membrane that relies on hydrogen and oxygen as input products. The anode reaction (+) separates a hydrogen molecule into two positively charged protons which permeate the membrane, while the two electrons are directed around in the electrical loop. These electrons power the batteries and return to cathode (-) where oxygen is fed through the membrane. The positively charged hydrogen ions then combine with oxygen atoms and the two electrons to produce water.

The fuel cell can produce 26 kWh of electrical energy using 1.6 kilograms of hydrogen—as a reminder, half the energy is generated in the form of heat while the other half is in the form of electricity. The hydrogen fuel is used either at night or under cloud cover and also kicks in at the start of long sails—hydrogen has 20 times higher power density compared to those of batteries.

Why They Do It

Erussard, a former merchant navy officer and a French sailing champion, says he wanted to circumnavigate the world with a powerful message, similar to the philosophy that drove the Solar Impulse 2 team.

“We want to demonstrate the use of renewable, green, zero-pollution fuel technologies and spread the message all over the world. It is for this reason that we will be visiting 50 countries, stopping at 101 ports,” he says.

Erussard reckons the challenge of navigating the ship will be formidable. “We will start by touring France and Europe. However, the voyages will get longer while crossing the Mediterranean as well as traversing the Atlantic and Pacific oceans. The temperature variations will also be very high.” 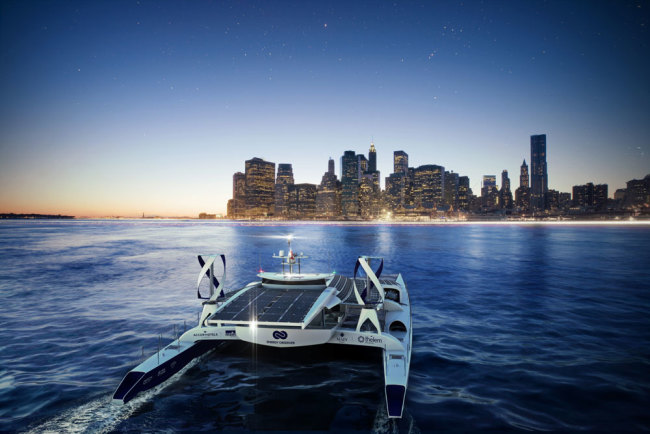 From the extremely low temperatures in Norway to the high temperature near the equator, Energy Observer will use this opportunity to test the same system and the same model in very different conditions. However, the boat

will not lack modern comforts.

“We believe we can’t dissociate the need to adopt responsible and ecological behaviors from our living in a modern way. Being ecological should not be associated with living in a forest with no electricity and dry toilets. This is also a real challenge as we will have to find solutions that will allow this comfort after dispensing with the excessive kilograms that will require more energy to propel the vessel,” Delafosse says.

The boat will have six cabins equipped with a bathroom, shower and toilet. The crew will eat what they bring with them and also what they fish.Delafosse says during their trip they will be visiting start-ups all over the world whose aim is to protect our planet through innovation.

“This will include all the technological solutions aimed at protecting our planet such as creating corals using 3D printers, generating light from sea bacteria or creating plastic using seaweed,” he said.