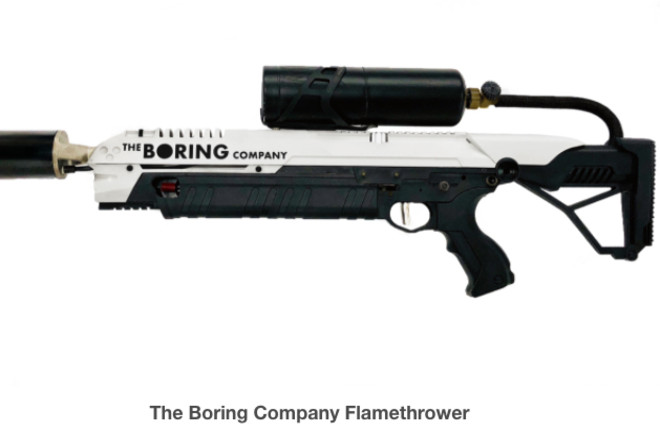 (Credit: The Boring Company) Sick of asking people for a light? Trying to put the spark back into your life? One solution: Buy yourself a flamethrower. If you're looking to burn a hole in your pocket, Elon Musk's Boring Company is selling the fiery devices for just $500 (plus taxes and shipping), and by all indications, they're going fast. Musk has been tweeting order counts by the thousand, and he most recently pegged the number at 7,000. The Tesla and SpaceX founder says he's planning to sell 20,000 total, in what appears to be a fundraiser for his tunnel-boring company. The product delivers on a promise he made back in December. If 50,000 of the Boring Company hats sold, he'd sell a flamethrower . That goal was achieved, and the flamethrower went up online a few days ago. Musk subsequently posted a video of himself running around an office with one of his toys, which appears to shoot a jet of flame a few feet. Another video shows a man and a woman holding flamethrowers and looking both excited and a little nervous.

, the flamethrower appears to be a Airsoft gun

modded with a fuel tank and nozzle. Additional specifications for the flamethrower, such as how much fuel it holds and how far it can shoot are unavailable at the moment. It should start shipping in spring, Musk says. If a flamethrower seems of dubious legality, don't worry, they're actually legal in most states. The one exception seems to be California (where the Boring Company is based), where Health and Safety Codes 12750-12761

forbid "any nonstationary and transportable device designed or intended to emit or propel a burning stream of combustible or flammable liquid a distance of at least 10 feet" without a permit, which can be obtained from the fire department. Musk's device seems to squeeze in under that definition as the flame only goes a few feet. He's not the first to commercialize a flamethrower, though. The Ohio-based company Ion Productions launched an Indiegogo campaign in support of its XM42 flamethrower

in 2015. Their device can spout flames up to 25 feet, the company says, and runs for a full three and a half minutes with the aid of a fuel backpack. The latest version sells for $1,099 on their website. If that's a bit too pricey, you could also just make your own

, though the estimated cost is $450 — just slightly cheaper than Musk's. As for why you might want a flamethrower (aside from the obvious cool factor), Musk suggests roasting nuts. And to go along with his fiery gadget, he's offering a companion fire extinguisher for just $30. If you're considering buying a new flaming toy, we suggest going with the whole package.