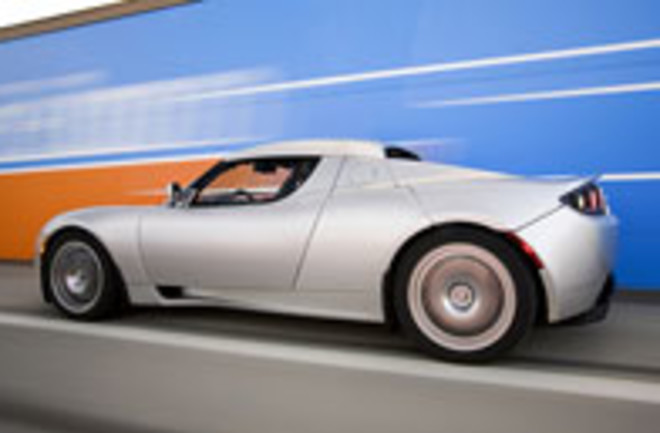 Earlier this month, the much-hyped electric car company Tesla Motors admitted that the hard financial times were taking a toll, and scaled back its goals to mass-produce flashy electric sports cars and sedans in the next few years. In that announcement, company founder (and space entrepreneur) Elon Musk revealed that the company would cut staff, close a Detroit office, and postpone production of its next generation vehicle, the Model S. Now the company has acknowledged that it was forced to cut almost 25 percent of its workforce, and analysts are wondering about its future. The company is reportedly reeling because a number of investors withdrew their support or demanded tougher terms as financial markets collapsed over the past month. The company restructuring means that the Model S, a four-door sedan, won't be ready until 2011, and

the startup could lose its first-mover advantage: By 2010, everyone from General Motors to Toyota Motor, Nissan Motor, and Daimler expects to launch their own electrified vehicles. James N. Hall, who runs the auto consulting firm 2953 Analytics, sees trouble ahead. "If the market wants [electric cars] in the number Tesla is talking about," he says, "a larger auto company will bury them on cost" [BusinessWeek].

Musk has promised that Tesla will keep up production of its sports car, the Roadster, which has an extensive backorder list, as well as plow ahead with plans for the Model S. To pay for all this, Musk hopes

to secure a share of the $25 billion pool of taxpayer-backed loans recently approved by the U.S. government to benefit the auto industry. "We'll put it to probably the best use of any other company," [said Musk]. "We'll spend it very effectively for the taxpayers, and I don't think the taxpayers will get better value from any other car company," he said [Reuters].

The company also expects to receive $200 million in loans from the Department of Energy, but the company won't get that money until it receives environmental approval for its new factory in San Jose, California. Analysts say that while the sporty Roadster has been a hit with auto enthusiasts, few can afford it at its current price of $109,000; for that reason Tesla has pinned its hopes of profitability on the Model S, which is expected to sell for about $60,000. The company's latest setbacks do

not come as a surprise to a number of industry analysts and observers, many of whom have predicted -- often repeatedly -- the small firm's failure.... "They've got some real severe problems," said Joe Phillippi, an independent, New York-based automotive analyst. Phillippi believes Tesla can make it through its current crisis -- if it does get the [Energy Department] loan guarantee, but he cautioned that "surviving is not the same as prospering," and it's going to be difficult for Tesla to make the jump from a struggling niche player into a more prosperous participant in the grueling automotive world [Motor Trend].