"Einstein's Pedometer" Tracks Subtle Benefit of Exercise: How Much Time Slows as You Move 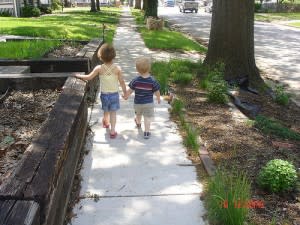 If all those vague exercise benefits like heart health

aren't enough to get you moving, maybe this will be: By taking that morning stroll, you're slowing down the rate at which you're aging and netting yourself extra time---whole picoseconds

of it. And you know it's true, because Einstein said so. A corollary of the special theory of relativity

, says that time will pass at a slower rate for something moving compared to something standing still; the faster the moving thing (in this case, you) moves, the more the rate at which time passes slows. So, you'll age more slowly meandering around your neighborhood at three miles an hour than you would back home on the couch, and even more slowly if you up that walk to a jog. There is, of course, an app for this, called Einstein's Pedometer

. It tracks your location via your iPhone's GPS, does some fancy math on it, and voila, tells you how much time you gained

. Just make sure you wear some sunscreen while you're out for your stroll; you don't want any wrinkles disguising the fact that you've aged trillionths of a second less than all your friends.