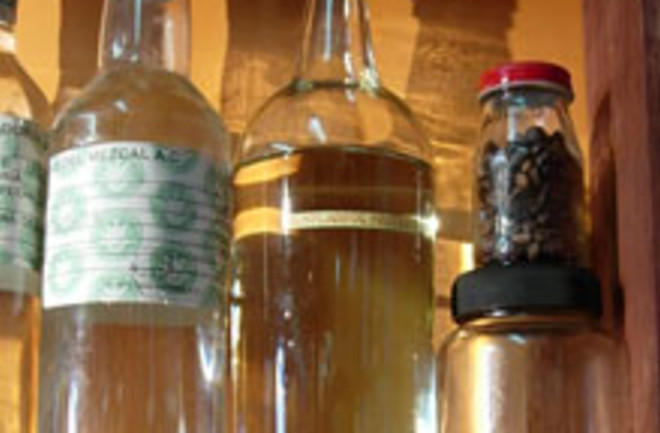 The next time, you're taking shots straight out of a bottle of mezcal, the potent Mexican alcohol made from the agave or a maguey plant, remember what you're drinking. Swirling in your mouth is not just the strong smoky alcohol guaranteed to knock you out, but also caterpillar DNA from the "worm" that is often found at the bottom of the bottle. The worm is actually the larval form of the moth Hypopta agavis that lives on the agave plant and really has no business being in the bottle except to serve as a marketing gimmick. Still, many a drinker has set out to prove his iron will and iron stomach by swallowing the booze-soaked insect at the bottom. Turns out there's no need for such dramatic gestures. Researchers have found that DNA from the caterpillar can be extracted from the alcohol it's preserved in. Ars technica reports on the scientists findings:

"We hypothesized that DNA from a preserved specimen can leak into its preservative medium, allowing the medium itself to be directly PCR amplified" the authors write. "We successfully tested this idea on mezcal—the alcoholic beverage famous for the 'worm' (a caterpillar) that is placed in the bottle of many brands—and indeed obtained amplifiable quantities of caterpillar DNA."

This is great news for researchers trying to extract DNA samples from old specimens preserved in alcohol. Now, they don't have to take pieces from a crumbling specimen and risk destroying it in the bargain, but can instead use the preservative liquid to obtain and sequence DNA. The scientists, however, warned that different specimens should not be placed in the same jar, as residual DNA would all swirl together. So no mixing worms, snakes, and scorpions. Related Content: Discoblog: Caterpillars Beware: Parasitic Wasps Come in a Wide Variety NCBI ROFL: NCBI ROFL: Lost in the sauce: the effects of alcohol on mind wanderingImage: Wikimedia