Dying of the Television Light 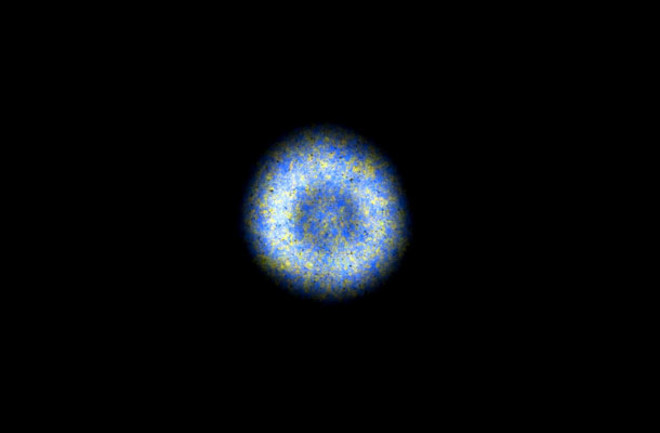 Photographer Kirk Crippens created this image of the speck of light that persists after the television is turned off. After a lot of trial and error, Crippens was able to catch the speck in the middle of the frame, at at magnification of about 5x, on an RCA solid-state black-and-white television. When the TV is on, electrons firing at its phosphor-coated screen cause the screen to emit light, creating the image. Electromagnets guide the beam and direct it to scan repeatedly across the screen. When the set is shut down, the electromagnets deactivate and the remnant beam from the electron gun defaults momentarily to the center of the screen before dying out—but not always in the same spot, as Crippens discovered. The blue and yellow colors here result from electrons exciting the two types of phosphor common in older TVs. Crippens: "This photo is part of the 'Pre-Pixel' portion of Pixel Nation—it is the stepping off point to pixelization. I show magnified photographs featuring a nixie tube, an oscilloscope screen, an amber computer monitor and then this black-and-white TV as 'Pre-Pixels' before moving into the depth and variety of pixels created through the years."