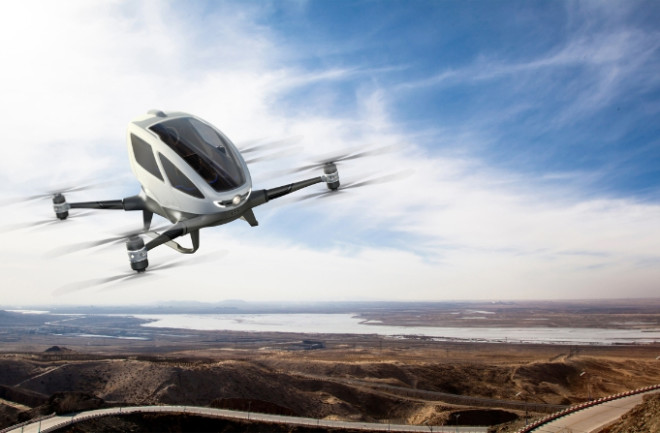 The EHang 184 represents an electric, personal Autonomous Aerial Vehicle. Credit: PRNewsFoto/EHANG Delivery drones have yet to begin showing up at doorsteps with packages from Amazon. But a new breed of drones could eventually begin carrying the most precious package of all in the form of human lives. One such passenger drone resembles a giant quadcopter that can carry a single passenger on 23-minute flights at speeds of about 62 miles per hour. The Chinese startup EHang unveiled the drone, called the Ehang 184, at the 2016 Consumer Electronics Show in Las Vegas in early January. Passengers use a tablet to set waypoints for the drone to follow and can click once for both takeoff and return, but the drone itself automatically handles the rest of the flying decisions. EHang representatives told Tech Insider and other news publications that they hope the passenger drone can hit the market starting sometime in 2016. https://www.youtube.com/watch?v=IrPejpbz8RI Drones could do much more than just act as personal helicopters. The U.S. military has a strong interest in autonomous drones that could fly injured soldiers from the battlefield to a hospital for treatment. In March 2015, U.S. defense firms demonstrated how a robot helicopter called K-MAX could evacuate a dummy standing in for a wounded soldier, according to Military.com. The K-MAX unmanned cargo helicopter, developed by Lockheed Martin and built by Kaman Aerospace, has flown 1,900 combat missions while delivering cargo for the U.S. Marine Corps. The Israeli defense firm Tactical Robotics has also been working on a heavy-lifting ambulance drone capable of transporting two wounded warriors—or 1,100 pounds of cargo—during missions with a radius of about 31 miles. The unmanned aircraft, called AirMule, underwent its first autonomous, untethered flight test on Dec. 30, 2015. This year, Tactical Robotics hopes to demonstrate the AirMule's ability to fly "beyond the line of sight" of human operators and follow a path through a forested area. Such ambulance drones make perfect sense in risky battlefield situations where helicopters and other aircraft face the possibility of being attacked or shot down by ground fire. A frontline commander might decide it's worth risking a drone to fly out a seriously wounded soldier who might otherwise die without medical attention at a hospital. It's a perfect example of using a robot to do the dangerous work that a human helicopter pilot or crew might otherwise have to do. In the case of a drone such as the K-MAX or AirMule, human operators could remotely control the unmanned aircraft from safer positions away from the battlefield. https://www.youtube.com/watch?v=BfyOZ9HITNg Personal passenger drones for civilians may need different justifications for their existence. It's possible a passenger drone such as the Ehang 184 might replace the need for a piloted helicopter in some cases. But such passenger drones would first have to demonstrate fairly high standards for automated safety and backup systems to get flight approval from government regulators in civilian airspace. Such challenges are similar to those facing companies trying to develop flying cars, except that the flying car idea almost makes more sense than a personal passenger drone. Companies such as Terrafugia envision their flying cars as being heavily automated and capable of flying themselves for the most part: effectively representing versatile robot vehicles that can both fly and drive on roads. There is also the possible issue of trust. Most soldiers probably would not hesitate to fly aboard an ambulance drone if it meant saving their life. But ordinary citizens may not feel incredibly comfortable flying aboard an automated passenger drone with no visible human pilot. After all, many people have just begun wrapping their heads around the idea of trusting a self-driving robot car to chauffeur them around on the ground. Flying the friendly skies with no human captain in sight may require yet another leap of faith. Would you take it?