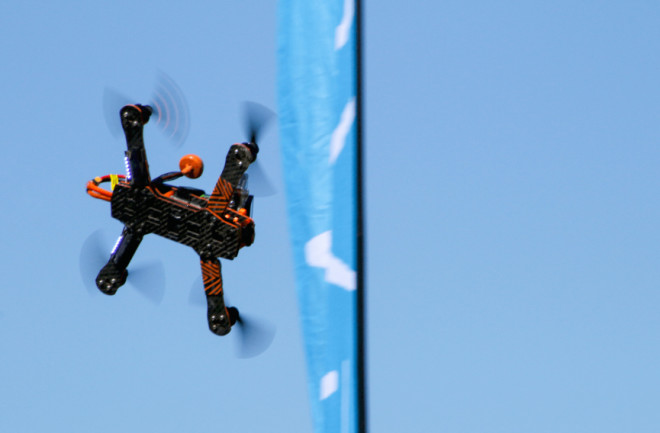 A drone during one of the races organized by the International Drone Racing Association. Credit: International Drone Racing Association Drone racing aims to win the hearts and minds of sports fans beyond the tech crowd. The International Drone Racing Association has struck a deal with ESPN for the sports network to televise several upcoming drone racing events for the first time. The drone racers represent more colorful, souped-up versions of the multi-rotor consumer drones that have become increasingly popular in the U.S. and elsewhere around the world. Drone racing pilots wear goggles that show live video from a camera mounted on the front of their drones as the small flying vehicles race around and through obstacles on racecourses. Starting in 2016, ESPN viewers will also get the chance to watch drone racing from either the "first-person view" of the pilots' goggles or from exterior racecourse cameras that show the drones whizzing by. "Because everyone can experience the thrill of racing as if they were sitting in the drone cockpit, the sport is skyrocketing,” said Scot Refsland, chairman of the International Drone Racing Association (IDRA), in a press release. "To go from a first ever, U.S. national drone race to partnering with ESPN for international distribution in eight months is truly a sign of great things ahead." https://www.youtube.com/watch?v=4flD2dClWbs&feature=youtu.be The first drone racing event scheduled for ESPN coverage is the 2016 U.S. National Drone Racing Championships held on Governors Island, New York City, from Aug. 5 to 7. Drone pilots will compete for the title of "fastest drone pilot in the United States" as the cameras provide views of both lower Manhattan and iconic landmarks such as the Statue of Liberty. Another event called the 2016 World Drone Racing Championships is scheduled for October. ESPN plans to stream both events live on its ESPN3 channel. Live-streaming of drone racing events has proven tricky in the past for other drone racing events. Spectators would likely prefer to see high-definition video of drone races in all their frenetic glory. But drone pilots typically prefer their goggles to receive standard definition video because the smaller amount of data means local wireless networks can better handle the video without any lag or delays in what the pilots see. As you might expect, any delay in the video seen by drone pilots could lead to unpleasant consequences for their racing drones if they crash into obstacles or go off course. It's unknown how ESPN might balance the needs of pilots and spectators for live-streaming the upcoming IDRA events. But the sports network also plans to showcase the drone races as one-hour specials on its main ESPN channel. Such events may come the closest of any real-world events to resembling the futuristic race and chase sequences from the "Star Wars" films and other science fiction settings.

A futuristic drone racing course. Credit: International Drone Racing Association The International Drone Racing Association has several rivals in its quest to make drone racing a more mainstream event. In December, a rival organization called the Drone Racing League kicked off its inaugural racing season. The Drone Racing League hopes to attract mostly online fans who want to watch drone racing on their computers, tablets, phones and eventually through virtual reality headsets, according to Bloomberg News. In that sense, it's aiming for a digital-savvy audience similar to the fans of competitive online games who primarily watch their entertainment through online streaming services such as Twitch. By comparison, the International Drone Racing Association seems to have even greater ambitions through its deal with ESPN. The question of whether or not many fans of mainstream sports such as football, basketball and baseball will embrace drones on ESPN remains up in the air. Then again, drone races might prove more attractive to ESPN viewers who watch auto racing events such as NASCAR. In any case, drones represent just one of many new technologies aiming to become a part of mainstream sports culture. American football teams at both the college and professional level have already begun embracing virtual reality as a way to train players and to give fans a behind-the-scenes experience of their favorite teams.