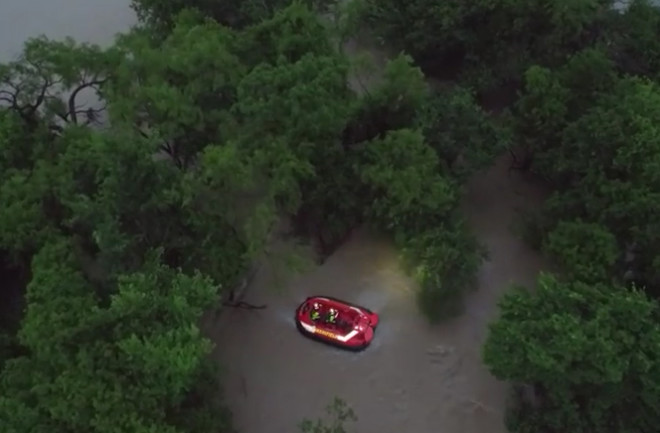 If you want a case-in-point example of the crucial role drones can play at the scene of a disaster, just watch these videos taken by an amateur pilot, and good Samaritan, from Texas.

Garret Bryl, a volunteer drone pilot working with the Joshua Fire Department in Texas, used his drone on two separate occasions to help save four people stranded amidst raging floodwaters on Sunday.

Bryl first used his drone to locate a pickup truck with two occupants that had been ferried off the road and into a patch of trees, leaving it hidden from rescuers. Bryl had fitted a searchlight onto his DJI Inspire One, and used it to guide rescuers in a hovercraft to the stranded vehicle, Motherboard reports.

Later in the day, Byrl used his drone to fly a rope to two people who were stranded in their mobile home, completely surrounded by raging rapids. You can watch a replay of the live action below, or read the entire story from WFAA 8 in Dallas.

Technically, Byrl was operating at these two scenes as a hobbyist, since he hasn’t received an emergency Certificate of Authorization from the Federal Aviation Administration (though he's applied for one).

However, the FAA is working to speed up its COA approval process. In Maine, for example, the FAA recently granted Down East Emergency Medical Institute an exemption allowing the non-profit organization to fly drones for search and rescue missions. Down East became the first civilian operation to receive such an exemption in the United States. The American Red Cross is also wants to deploy drones in disaster zones, but hasn't yet submitted a petition.

As of May 21, the FAA has granted 425 exemption petitions for a variety of uses, but regulators’ list still remains long. You can read all the current exemption requests online.