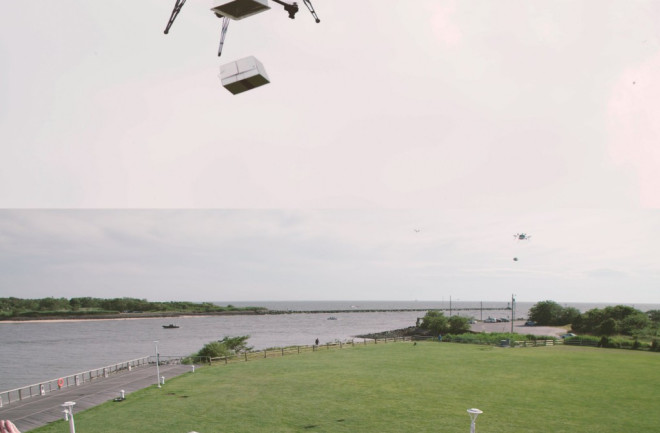 A drone operated by the startup Flirtey delivers a box of medical supplies from a ship to a medical camp. Credit: Flirtey A drone delivery startup that carried out the first government-approved test in the United States has recently shown how drones could deliver disaster relief supplies from ship to shore. The startup's greater ambitions include nothing less than challenging Amazon and Google in the race to get drone delivery services off the ground. The delivery drones belonging to Flirtey, a startup based in Nevada, can carry up to five and a half pounds on round-trip journeys of up to 10 miles. Such figures are significant considering that Amazon CEO Jeff Bezos has said 86 percent of Amazon packages weigh under five pounds. Flirtey envisions a future where drones regularly take care of commercial package deliveries and perform drone pizza delivery. They could also play more specialized roles in delivering emergency supplies and medical kits to disaster zones. "I would venture to say the majority of things people order online will be sent by drone in the not-too-distant future," says Matt Sweeney, CEO of Flirtey. "When you think of traditional package delivery services such as FedEx and UPS, more than half of those packages may be sent by drones in the future." In 2013, Sweeney founded Flirtey as an Australian drone delivery startup that had partnered with a textbook company to deliver books to university students. Since that time, Flirtey moved its headquarters from Sydney to Silicon Valley, before eventually settling down in Reno, Nevada because of the region's special status as one of six drone test sites approved by the U.S. Federal Aviation Administration (FAA). https://www.youtube.com/watch?v=qPkN9y_mjPo&feature=youtu.be

Flirtey proceeded to pull off the first FAA-approved drone delivery of medical packages to a rural health clinic in Virginia in July 2015. This year, the startup stepped up its game with the first automated drone delivery of a emergency supplies to the front doorstep of a Nevada home in March. Most recently, Flirtey conducted its ship-to-shore demonstration of drone delivery in cooperation with Johns Hopkins University, the nonprofit Field Innovation Team and several United Nations agencies on June 22. Flirtey drones flew back and forth between an ship anchored offshore and a medical camp located at Cape May, New Jersey. One one leg of the round trip, the drones carried medical samples such as blood and urine from the medical camp to the ship. On the return leg, the drones carried medical supplies and water purification tablets back from the ship to the medical camp. Delivery drones carrying water and first aid kits could represent robotic Florence Nightingales during disasters such as 2012's Hurricane Sandy that left thousands of people in New Jersey and the New York City area cut off from help. The experience of Sandy inspired Flirtey's latest demonstration off the coast of New Jersey, but drone delivery could also help in many other humanitarian relief scenarios. Timothy Amukele, assistant professor of pathology at Johns Hopkins University School of Medicine, described how it took nine days to get Ebola test results back during the recent Ebola crisis in African countries such as Liberia. "What all the organizations said was that if there is the ability to send in a ship and deploy drones on that ship, it could have a significant impact on patient outcomes," Sweeney says.

Taking on Amazon and Google

Flirtey faces some stiff competition in trying to launch a drone delivery service. Both Amazon and Google have been developing and testing drones for drone delivery in the United States and other countries. Wal-Mart has also applied for permission to test its own delivery drones. But Sweeney expressed confidence that Flirtey has a head start on its larger rivals that will pay off in the long run. His startup already does a commercial drone delivery business in New Zealand under that country's relatively more liberal drone regulations. Any U.S. drone delivery service must still wait for FAA regulations to catch up. At the moment, any company that wants to operate drones for business reasons is supposed to apply for a Section 333 exemption with federal regulators. But the FAA recently took a step toward loosening restrictions by approving new commercial drone regulations that would take effect in August. Those new regulations still come with some restrictions that could prove tough for drone delivery services, such as requiring a human operator who has visual line of sight on the drone. But Sweeney sees it as a step in the right direction. "Now people recognize it’s an inevitability that drone delivery will happen," Sweeney says. "We're ahead of anyone else in that regard and expect to lead in the marketplace."