Do Trash Can Robots Dream of Garbage? 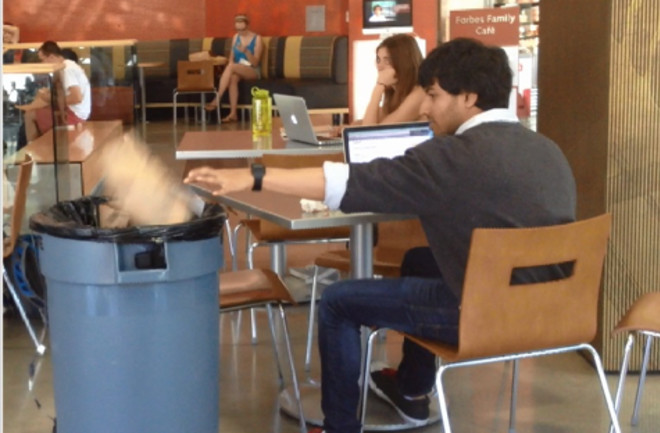 Credit: Stanford University Center for Design Research Most people probably don't imagine how a trash can feels when they toss a banana peel or crumpled kleenex into its gaping maw. But a robotic trash can managed to convince at least some people in a Stanford University cafeteria that it wanted to be fed garbage. Stanford University researchers built the remotely-controlled robot in order to test how humans reacted to it in a more natural setting outside of a laboratory. Several groups of people willingly tossed their trash into the trash can robot; others simply ignored the robot. But some people seemed compelled to give the robot what they thought it wanted — trash — without having any on hand. One group of people tore off the bottom of their order receipt to "feed" the robot. When researchers asked them about that action, they said they thought the robot "wanted" trash. The robot experiment was detailed in a paper published online from the Association for the Advancement of Artificial Intelligence 2015 Spring Symposia. "People in general seem to believe that the robot has some intrinsic desire for trash," said Stephen Yang, a Ph.D. student in engineering at Stanford University. "In other words, people believe that the robot wants trash rather than just serving a purely functional purpose. As a consequence, we've seen cases where people would attempt to attract or bait the robot with trash." Yang also shared the case of a five-year-old child that was not detailed in the paper:

In one particularly amusing example, there was a child about five years old who had first encountered the robot with his parents. The mother proceeded to show the child how to throw trash in the robot and the robot wiggled. Later on in the study, the child re-approached the robot on four separate occasions each time trying to bait the robot to move in a certain direction by holding out trash directly in front of the robot and then slowly pulling it back. What we find super interesting about this anecdote is that the child was never taught or told that the robot desired trash! Through his own perception of the situation, he had conceived the idea all on his own!

The human tendency to see non-living things as having minds of their own is nothing new. Humans have a well-developed "theory of mind," the ability to infer and understand mental states belonging to other people. They can interpret other people as having intent, belief and desire. Children develop a theory of mind as they learn to socialize with other people. But people may also attribute mental states to non-living objects such as stuffed animals and robots. Stanford's trash can robot does not actually have much artificial intelligence of its own. One of the Stanford researchers secretly controlled the robot's movements and actions by a laptop while sitting in the cafeteria. The researchers developed the experiment with a colleague from Denmark as a way of learning more about how humans respond to robots; lessons that could prove useful in designing future robots that must engage in social interactions. (See this previous post for more about why the trash can robot needs social skills.) But the experiment also confirms how readily humans will interpret robots as having personalities. Past studies have shown how some people who own Roomba robotic vacuum cleaners will name their robots and treat them as living social beings. Similarly, people who bought Sony's discontinued line of AIBO robot dogs often considered them as being more than just machines. If a humble trash can robot can inspire similar reactions, it's no wonder that Google has taken great care to craft a lovable, friendly image for its self-driving robot cars.