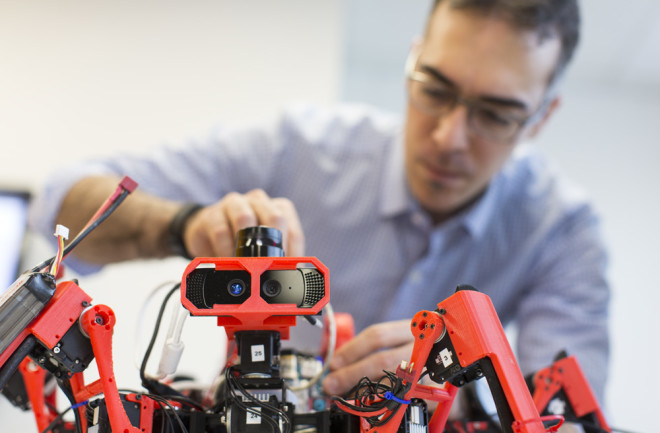 Credit: Siemens Robotics Lab In the classic children's book "Charlotte's Web," humans are amazed by a talented spider that can weave words into her web. Spider-inspired robots could also someday amaze humans by behaving as mobile 3D printers that construct artificial structures instead of spinning silk webs. The German technology giant Siemens has been developing robotic and artificial intelligence technologies that could potentially enable swarms of such spider-worker robots to work together in building aircraft and ships. The dream of mobile 3D printing arose from an annual Siemens competition that asks company researchers to propose and vote on technological innovation projects. The spider-worker robots proposed by the U.S. region of Siemens won the hearts and minds of the company's engineers and robotics researchers and officially kicked off in January 2014. But Siemens does not necessarily plan on turning the spider robots into a commercial product at the end of the project. Instead, the company hopes the ambitious vision can inspire spin-off technologies that improve the capabilities of robots to work together in groups. "What we really aim at is not the specific application this could be turning into, but all the cluster of technologies that could spin out of this and could lead to potential results down the line for the company," says Livio Dalloro, head of Research Group at Siemens Corporate Technology. "It’s not the robot in itself, but for us it’s a killer research application."

Credit: Siemens Robotics Lab The spider robots currently consist of off-the-shelf models outfitted with consumer-grade 3D printers. Most popular 3D printers work by using spools of plastic filament as their raw materials, melting the plastic filament, and then squirting the heated plastic out through a nozzle. Each spider robot has an individual 3D-printer arm that allows them to directly "print" an object through guided motions. Before starting their work, the spider robots use cameras and laser scanners to look at the local workspace. Knowing the workspace means the robots can position themselves accordingly to build an object in the most efficient way possible. The robots even take the reach of their individual 3D-printer arms into account when organizing amongst themselves. Siemens researchers also had to figure out a way for the spider robots to have access to the spools of plastic filament as they climbed around their workspace. The current solution involves pairing each spider robot up with a "sidekick" robot on wheels that carries the spools of 3D printing material. (The spider robot experiments currently use a biodegradable material made from cornstarch and sugarcane called polylactic acid.) "We completely reprogrammed the second robot to follow as a sidekick for the spider robot but on a ground level," Dalloro explains. "The spool really allows the filament to be curved in the air to reach the spider in a 3D space; wherever the spider, goes the sidekick robot follows."

Credit: Siemens Robotics Lab But teaching robots to work together isn't easy. Siemens has been developing artificial intelligence software that enables a test swarm of three spider robots—and their three sidekick robots—to cooperate seamlessly in a pack of six robots. That means teaching the spider robots to work together on 3D printing an object and also coordinating the three sidekick robots to follow the spider robots at an appropriate distance. "It's about connectivity and self awareness," says Kurt Bettenhausen, senior vice president at Siemens Corporate Technology. "Can these robots really be self aware in terms of where they are and what they can do based on their own resources?" This robotic self awareness isn't about the spider robots suddenly realizing they are very special snowflakes and each have a soul. It's about each of the robots knowing what it's doing and where it's working in relation to the other robots. It's also about communication; a robot that runs low on battery power might tell the other robots to take over for it as it trundles off to recharge, Dalloro says. At the end of the day, the Siemens team will probably be happy just to have developed better artificial intelligence software capable of coordinating swarms of robots that can work together toward a common goal. The software could end up becoming the brains for many more robots working in future homes, offices and factories.