Yesterday, we revealed the first half of our official Top Ten Science-Related Halloween Costumes.Now we bring you the Top Five. 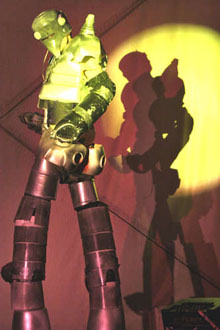 5) RecycleBot: Today’s high-tech robots can walk, talk, and put away groceries.This one’s no Wall-E, but there’s a certain old fashioned charm to a giant robot made from recycled laundry detergent bottles.With a bit of tweaking, this could also work for either Ironman or Tin Man.

4) Biohazard Suit: The sky is falling, and we don’t mean the stock market.Protect yourself from harmful radiation and slobbering-drunk partygoers with this outfit, complete with Geiger counter, gas mask, and Level B chem suit. 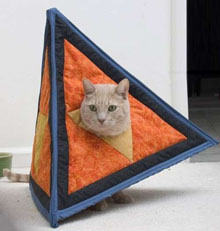 3) Cat-ahedron: Here’s one for quilters and cat lovers—although the cat in this picture is probably wishing he could escape into a fourth dimension.What’s next?Knitted hyperbolic shapes?Oh, wait. 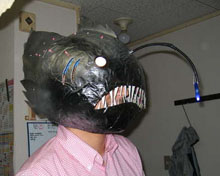 2) Anglerfish Head: After the male anglerfish attaches itself by the jaws to a female, its body atrophies into little more than a pair of testes.Remind you of anyone you know? 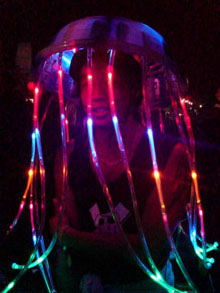 1) LED Jellyfish:(Not to be confused with the Remote-Controlled Flying Jellyfish)Great minds think alike: Our winning costume also happens to be a Nobel laureate.This year’s Nobel Prize in Chemistry went to the discoverers of the green fluorescence protein (GFP), extracted from glowing jellyfish.GFP is now used to track all sorts of biological processes, and make freaky glow-in-the-dark animals.Without actually genetically engineering yourself, you can glow like a jellyfish with a plastic basin and flashing LED lights.

Got your own science costume? Send us a picture at webmaster@discovermagazine.com, and we’ll post the best submissions later this week. Happy Halloween!