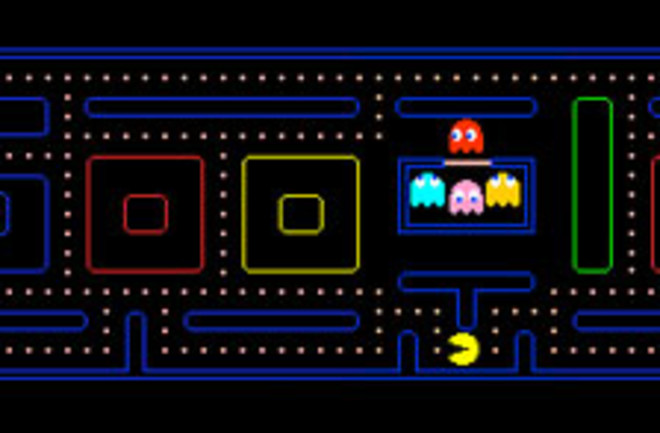 Expletives and MIDI music rose from office cubicles this past Friday: Pac-Man had returned. On May 21, Google replaced its usual blue, yellow, red, and green title with what the company calls a "doodle." But unlike previous replacements, which have celebrated everything from Pi day to Norman Rockwell's birthday, for Pac-Man's special day (the 30th Anniversary of the game's Japan release) Google pulled out the big guns, er, ghost-eaters. This time, the doodle was an animated and playable version of the 1980s Namco video game, complete with our pie-shaped hero and his multicolored ghost foes: Blinky (red), Pinky (pink), Inky (cyan), and Clyde (orange). But some kill-joys complain that Friday's Pac-Man play hindered productivity, and set out to determine just how much money had been frittered away as employees avoided their work. The BBC reports that the firm Rescue Time tracked 11,ooo users' online activity and noticed that Pac-Man kept them on Google's site about 36 seconds longer than usual. Multiplying those 36 seconds by Google's 504 million users, that means over 500 years worth of work time spent playing. The firm estimates an average worker's salary at $25 an hour for a grand total of about $120 million in lost productivity. How Rescue Time knew that employees playing Pac-Man would have otherwise spent those 36 seconds working seems a stretch. How do they know, for example, those otherwise dreary 36 seconds wouldn't have instead been spent tweeting or reading about animal sex? After all, humans are eminently distractable, especially on a spring Friday. If anyone was really affected by the Pac-Man celebration, perhaps it was those caught off guard by a glitch in an original release of the doodle. To the panic of some Firefox-users, the game's sounds started automatically, even in hidden tabs. (The final version required the click of an "insert coin" button.) As ComputerWorldreports:

"We had a new kind of 'virus' attack today that people were calling in about," said Mike Williams, a support manager with Clearwater, Fla.-based Sunbelt Software. "A few people, including an admin[istrator], called in thinking they had virus with the sound of a siren in the background of their Web browser."