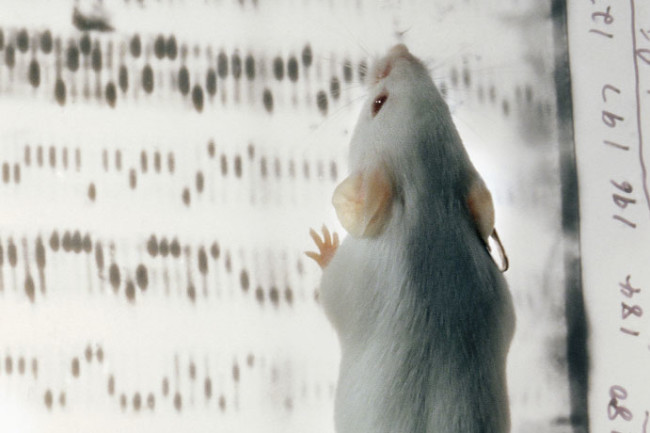 A transgenic mouse — one with foreign genes swapped into its DNA — poses with its own gene sequence at Harvard Medical School. (Credit: Peter Ginter/Getty Images)

“Cancer has been cured a thousand times.” So says Christopher Austin, the director of the National Center for Advancing Translational Sciences (NCATS) at the National Institutes of Health.

The catch? All those cures happened in mice. Hundreds of drugs have wiped out mouse tumors, only to fail in human trials. Or worse, they turned out to be toxic to humans. An astounding 90 percent of all drug trials never make it to FDA approval.

The humble lab mouse shoulders much of the blame. But should scientists ditch their furry model altogether, or can they simply build a better mouse?

Mice entered the lab back in the early 1900s. Geneticist Clarence Cook Little suspected cancer was an inherited disease, and mice — short-lived and low maintenance — were the ideal test subjects. His lab eventually sold mouse strains all over the country. He even secured the mouse as the official animal model for government-funded cancer research.

Little wasn’t totally wrong. Humans and mice share about 97 percent of their genes. This similarity is a blessing and a curse. In some cases, the difference is just one nucleotide — a single G, T, A or C. But Austin says it’s like reading a word with a letter missing.

“[If] you mess up a letter, that changes the meaning of the word,” says Austin. “And that’s true in DNA spelling, too. Sickle cell anemia is caused by one difference out of 3 billion.”

Sterile labs could also be muddying results. A recent study showed that mice were better models when they were exposed to common human viruses. Lab mice bred to be “perfect” controls live a pampered lifestyle that alters their physiology. In other words, a dirty mouse isn’t such a bad thing.

Another issue: Most scientists aren’t experts in mouse biology.

“I think in the past, some investigators worked in a vacuum,” says Elizabeth Bryda, director of the Rat Resource and Research Center (RRRC). Scientists aren’t always thinking about the genetic differences between mice and humans because they’re focused elsewhere. “Maybe the species you’re working with isn’t the best species for the question, but you don’t know enough about the physiology or the genetics to recognize that,” she says. 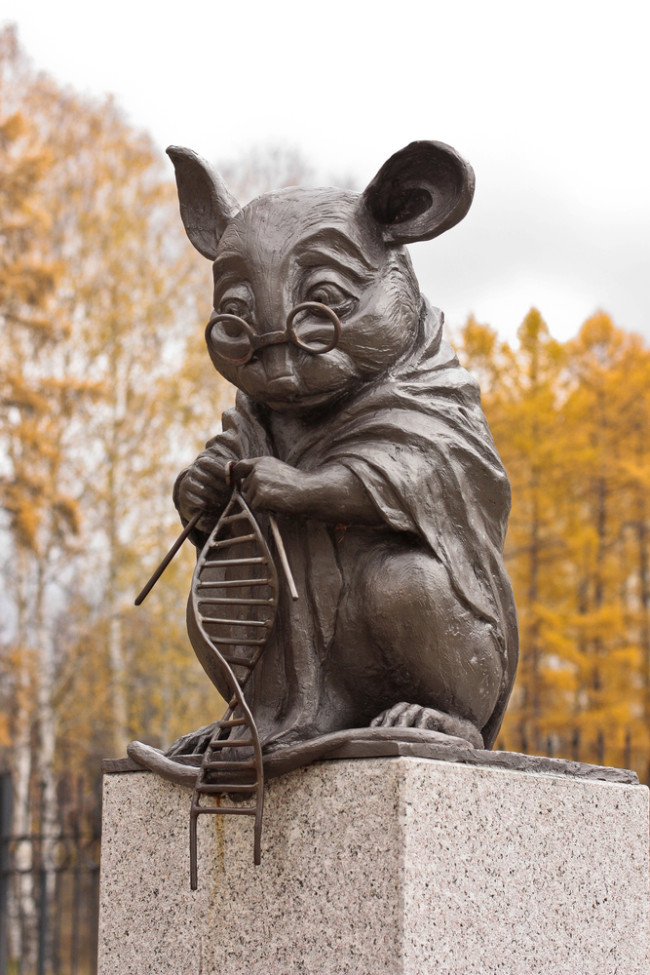 A monument to the lab mouse in Novosibirsk, Russia. (Credit: Helen Birkin/Shutterstock)

Like mice, rats are common in labs. The two have minor physiological differences and, more notably, psychological variations that affect how they interact. But the issues plaguing mouse research often appear in rats, too.

RRRC helps solve that by acting as a kind of rat customization shop. Want a rat with pulmonary hypertension and a deficiency of serotonin? They’ve got the model for you. Or maybe one with cataracts? No problem. Thanks to CRISPR gene-editing tools, researchers can tweak the rat genome to create so-called transgenic animals with human-like disease traits.

Using gene editing to create rodents that are ideal research models could narrow the genetic divide between humans and their animal stand-ins. But scientists are still unraveling what makes a mouse tick.

To this end, the International Mouse Phenotyping Consortium is doubling down on the mouse and picking through its genome with the finest of combs. Mice have around 20,000 genes that bear strong similarities to humans. We know the function of about half of these, says Kent Lloyd, who directs the Mouse Biology Program at the University of California, Davis.

He and his colleagues at the consortium want to understand the other half. The process is painstaking and involves the systematic “knockout” — removal — of relevant genes in stem cell cultures. Once a gene is gone, researchers grow mice from the stem cells to see what happens. By 2020, the group hopes to fully understand the 20,000-gene bridge between us and our lab experiments.

Some efforts, like Austin’s NCATS, have stopped chasing the perfect mouse entirely. They’re developing computer models that can re-create human cells and organs to test how virtual humans respond to new drugs. Other researchers are building what some call “organs on a chip.” Introducing new drugs to plastic microchips lined with human cells should let researchers watch what happens without ever involving a living creature.

Scientists’ long relationship with lab mice has been one of incremental advances to improve a flawed system. Fittingly, this is exactly how most scientific research progresses — by critically examining what we know to expand our knowledge of what we don’t.

[This article originally appeared in print as "Designing a Mightier Mouse."]