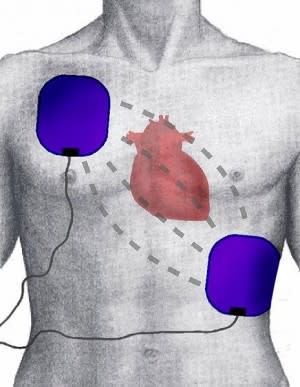 Touted as life-saving devices, some 1.5 million automated external defibrillators (AEDs) are around the US. AEDs are designed to be used by anyone, regardless of training, to restore normal heartbeats after sudden cardiac arrest. And in this life-or-death situation, a surprisingly number of the devices fail. Between 2005 and 2009, there were 28,000 reports of AED malfunction in the US, representing 1 out of 50 devices in the country. Mark Harris at

investigates the cause of these failures. Surprisingly basic engineering errors were responsible for some of the malfunctions, such as parts that are just too imprecise for a matter of life or death:

One AED, the brand name of which the FDA would not disclose, was found to occasionally misdiagnose the heart’s electrical rhythm. It delivered some shocks that weren’t needed and failed to deliver others that were. The culprit was a resistor that could vary in resistance by up to 10 percent of its stated value. “When our engineer looked at this design, it was an instant ‘uh‑oh,’ ” says [Al Taylor of the FDA].

How could regulations on medical devices be so lax? Harris explains a loophole in the FDA regulation system:

If you count AEDs as Class III devices—those intended to support and sustain life—then manufacturers must produce extensive efficacy, safety, and reliability data, usually provided by large-scale clinical trials. This process can cost upward of US $800 000 and take two years. Manufacturers can, however, get around those requirements, thanks to what’s called the 510(k) process, which effectively removes AEDs from Class III. The process requires merely that a new AED be “substantially equivalent” to any AED on the market. The 510(k) system was originally intended as a temporary measure to grandfather in devices already on the market in 1976. More than 30 years later, the process is still being used to clear AEDs.

While this system sounds broken, strict regulations always have to be weighed against access. If standards were so high that AED devices have trouble getting approved in the first place, that's still not much help to someone in cardiac arrest. "You can always find engineering problems, but patients in cardiac arrest are predominantly going to die," physician Gust Bardy told IEEE Spectrum. "The more restrictions one puts on AEDs and the more demands for AED perfection, the fewer lives will actually be saved." In fact, lack of access to AEDs is probably responsible for more deaths than faulty ones: AEDs were used in only 4% of sudden cardiac arrest cases out in public places. Mark Hardy's feature

at IEEE Spectrum explores how better policy on the regulation and deployment of AEDs can save more lives.