DARPA's Next Prosthetic Arm Will Connect to Your Brain 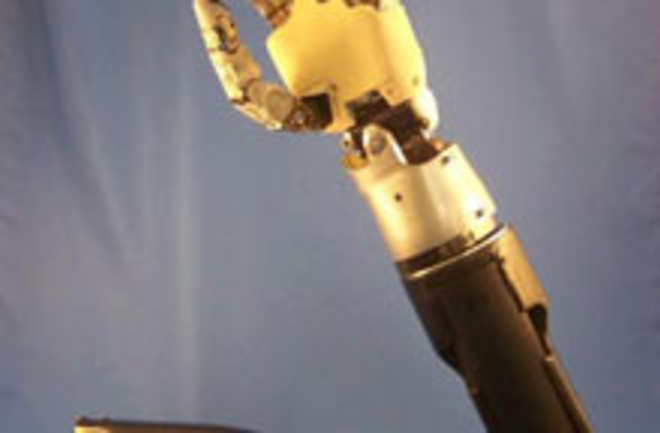 For DARPA, the secretive military research agency, it's not enough for a prosthetic limb to simply resemble a normal one, or for a patient to be able to move it through some remote control. DARPA-backed engineers are attempting to build a system in which peripheral nerves would be reattached to artificial limbs, which could send signals to a brain sensor that could reply. This would be a vast improvement over prosthetics that require conscious directives, and could turn a prosthetic into something that responds the way an ordinary limb would.

Darpa’s after a prosthetic that can record motor-sensory signals right from peripheral nerves (those that are severed when a limb is lost) and then transmit responding feedback signals from the brain. That means an incredibly sensitive platform, “capable of detecting sufficiently strong motor-control signals and distinguishing them from sensory signals and other confounding signals,” in a region packed tightly with nerves. Once signals are detected, they’ll be decoded by algorithms and transmitted to the brain, where a user’s intended movements would be recoded and transmitted back to the prosthetic. [Wired.com]

, tests on monkeys have shown that the primates have remarkable success controlling a prosthesis through a cortical chip implanted in their brains, and researchers have undertaken some human tests. What remains to be seen, though, is how much dexterity people can get through this process.

"The next big step is asking, how many dimensions can you control?" says John Donoghue, a neuroscientist at Brown University who develops brain-computer interfaces. "Reaching out for water and bringing it to the mouth takes about seven degrees of freedom. The whole arm has on order of 25 degrees of freedom." [Technology Review]

with a prosthetic arm. The problem isn't just sorting out signals in that densely packed nerve region. Today's brain arrays can't process enough information for a person to use that many degrees of freedom, Wired.com reports

Scientists hope that doubling the capacity to listen to the brain will provide enough independent signals to enable more complex movements on the sophisticated APL arm. "This is a highly dexterous and anthropomorphic arm," says Andrew Schwartz, one of the neuroscientists involved in the study. "The information bandwidth you need to control the device is a lot higher." [Technology Review]

Initially Schwartz hopes to reach 11 degrees. But if the scientists could achieve greater than that, they could give the patient a much greater feeling that the prosthetic was an easy-to-use part of their body, and not some clunky replacement part. That would be the point at which prosthesis

-controlling brain implants would take off, because they need to be much better than those controlled via a joystick to make the invasive surgery (and possibility of replacement) worthwhile. Related Content: 80beats: DARPA’s New Sniper Rifle Offers a Perfect Shot Across 12 Football Fields

DISCOVER: The Rise of the Cyborgs