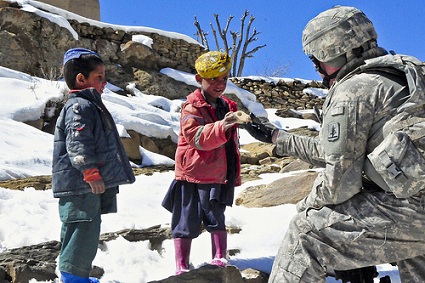 Take a look at the guy standing alone next to the punch bowl at a party and it's clear: meeting new people can be pretty challenging. And while parties can be tough for some, it's even more difficult to integrate and interact after being deposited on the other side of the world in a completely new culture. Being a suave, talkative ambassador for your countries is difficult under these circumstances, and the nerds at DARPA decided that soldiers could use a lesson in what they call "basic human dynamics skills." They've decided that our soldiers just aren't smooth enough and could use lessons to turn them into the ultimate conversationalist. Wired's Danger Room blog reports on the DARPA announcement:

“After such training,” the agency adds, “soldiers will be able to approach and engage strangers in unfamiliar social environments, orient to unfamiliar patterns of behavior, recover from social mistakes, de-escalate conflict, rigorously practice transition in and out of force situations and engage in the process of discovering and adapting to previously unknown ‘rules of the game’ encountered in social engagements.”

To our ears, that sounds an awful lot like the plot to The Game, Neil Strauss' best-selling tale of transformation from awkward writer to professional pick-up artist. The book inspired a VH1 reality show, starring “Mystery,” Strauss’ guru of seduction. Mystery’s methods for turning virgins into lady-killers were deceptively simple: dress outrageously, memorize pickup lines and strategically put women down (especially if they’re sexy).

DARPA's approach to solving the problem will probably be a bit different than The Game's. Most soldiers don't have much experience dealing with other cultures, and for many their first steps on a foreign base are their first time off American soil. The announcement calls first to research and define what types of lessons might help their soldiers interact with others when they are in a wartime situation. The technical-sounding "Strategic Social Interaction Modules

80beats: DARPA’s Next Prosthetic Arm Will Connect to Your Brain

Not Exactly Rocket Science: Can a sniff of oxytocin improve the social skills of autistic people?