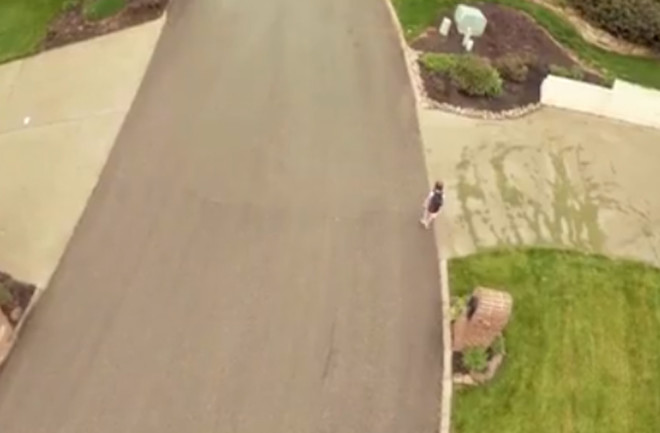 A helicopter parent is a figurative term used to describe a parent who is so wrapped up in their children’s lives, they seem to hover over their existence like a helicopter.

Well, one man from Tennessee may have become the world’s first literal helicopter parent after following his daughter to school with a drone.

This man either deserves the “Dad of the Year” award, or he was just looking for an excuse to tinker with his DJI Phantom. Either way, his 8-year-old daughter Katie wanted to test the waters of independence by walking to school alone one day. But instead of letting her venture out into the wide world totally solo, her father kept tabs on her from above with a drone.

“It was something kind of fun to do, just to let her know I’m watching her,” Early told WVLT Local 8. “But it’s not something I’m going to do every day.”

Early’s video has certainly garnered a lot of attention on the Internet. TIME even went so far as to call him the “world’s most embarrassing dad.” But although her classmates are seen on film pointing at the drone, there’s no indication that Katie was red-faced with embarrassment.

From what daddy told WVLT Local 8, he’s not going to make this a daily routine — just a little fun. However, we’ll see what he says when Katie heads off to college, or — heaven forbid — starts dating.

A Space-Age Journey into the Past with Albert Lin