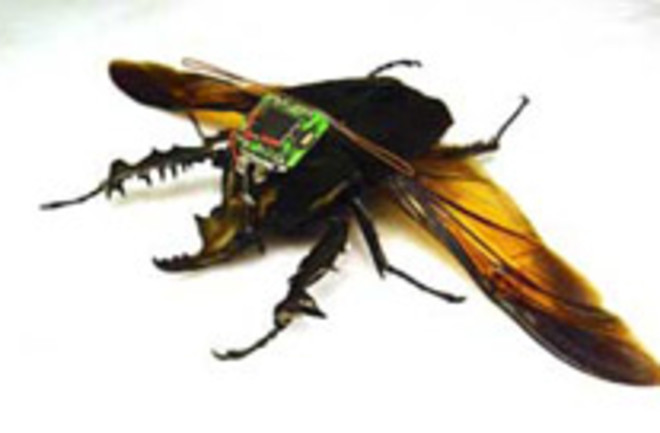 The idea of cybernetic organisms, known as cyborgs, is becoming less science fiction and more reality. Cyborg research has helped "the paralyzed walk, the mute speak, and the near-dead return to life." But cyborgs don’t always have to be human. University of California, Berkley’s Kirotaka Sato decided to create a cyborg insect, so he could control how they fly. And it worked: When he attached electrodes to a living insect’s brain and muscles and sent an electrical signal through them, he was able to motivate the bug to fly, and to manipulate its flight direction. The lucky insects—green June beetles and a close relative called Mecynorrhina torquata—had their brains outfitted with a radio antenna. Sato and his team then conducted an experiment to see how the insects performed in the air. After the researchers sent electrical pulses to the insects’ brains, the bugs did indeed take flight. While the longest flight time was 30 minutes, most beetles didn’t hit the one-minute mark. By stimulating the insect’s wing muscles—the wing that is opposite to the direction the insect is heading— the beetle will adjust its other wing so it can resume flying parallel to the ground. By knowing their flight behavior, Sato found he could change their direction about 75 percent of the time. Ultimately, the researchers want the cyborg insects to be remote-controlled, so they can be used to spy and perform other important tasks. But first we’ll need to figure out how these bugs can fly for more time and more efficiently than they do now. Related Content: Discoblog: Superhuman Cyborg Vision DISCOVER: Beetle Borgs