Could Evaporation Ever Power the Country? 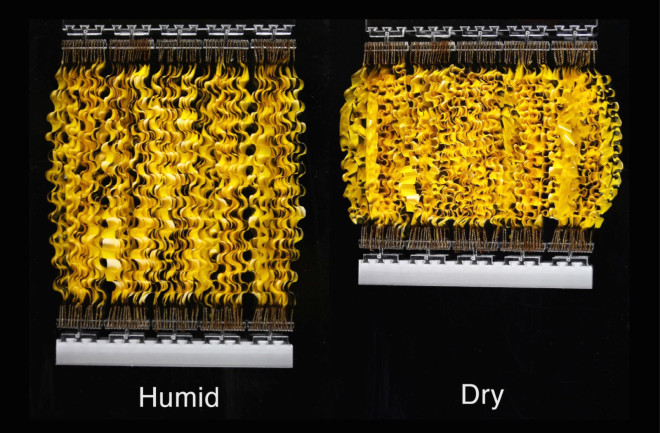 An example of the expandable "water responsive material" that could provide power from evaporating water. (Credit: Xi Chen) There's energy everywhere, the trouble is harnessing it. We extract power from wind, waves and sunlight, but researchers from Columbia University say there's another font of untapped energy — water evaporating from lakes and reservoirs across the country. In a new analysis laying out a prospective plan to harness evaporation, they say that up to 325 Gigawatts of energy — 69 percent of US energy generation in 2015 — is potentially available for use. The technique would also reduce levels of evaporation, a boon to communities facing droughts and water shortages.

From Bacteria to Electricity

The work is led by Ozgur Sahin, an associate professor in the physics department at Columbia. His plan is based on a 2015 proof-of-concept study using bacterial spores that expand upon contact with water. Coating a flexible strip of tape with the spores and exposing it to water causes it to expand and contract, and Sahin used that motion drive an electrical current that powered LED lights and even a small toy vehicle. An important side note: the amount of energy they extracted was measured in microwatts — a millionth of a watt. Now, in a paper published Tuesday in Nature Communications, the researchers lay out a much more ambitious plan. Large-scale generators utilizing the same bacterial spores could be laid across bodies of water, they say, expanding and contracting to capture evaporating water and converting it into energy. The devices rely on a layer of "water-responsive material" — think a larger version of the spore-laden tape — floating just above the water's surface and covered by shutters. When water begins to evaporate under the sun's heat, shutters on the top would close while shutters on the bottom would let the water vapor in, causing the material to expand. When they reach capacity, the top shutters open, allowing water to evaporate from the spores and letting the material contract once again. The expansion and contraction would drive a generator, and the cycle could repeat again and again. The energy-generating cover would also cut evaporative losses by up to 50 percent, Sahin says, which could be beneficial to communities reliant on large reservoirs, such as in California, where evaporative generators could provide both power and water.

To be useful on a large scale, however, the generators would need to cover thousands of square miles of lakes. To reach the 325 GW maximum the researchers cite in their paper, they would need to cover nearly 40,000 square miles of water; that works out to nearly every body of water in the country, excluding the Great Lakes—so forget fishing and boating. The researchers provide no cost estimate, but it's sure to be astronomical. Looking beyond all of these issues, if it was somehow possible, the effects on water quality are unknown, as well as the impact on the water cycle. In addition, these generators don't work as well in colder temperatures, and wouldn't function at all if a lake freezes. As a solution to climate change and an energy crisis, this concept falls short. In limited areas, such as reservoirs in the desert where evaporation is a concern, this could someday function as an supplemental source of energy, though. The researchers cite the E.V. Spence Reservoir in Texas, which they say could produce 178 megawatts of power a year if completely covered, more than half as much as a nearby wind farm. Extracting power from water isn't new, hydroelectric dams are common, and mills dating back centuries have tapped into the water cycle for power. Small-scale experiments with wave generators are also showing promise on a small scale; the first such plant went online in Hawaii last year, using floating buoys attached to the seafloor to harness the motions of waves. Unorthodox? Sure, but in the race to power the world without fossil fuels, a little creativity can go a long way.