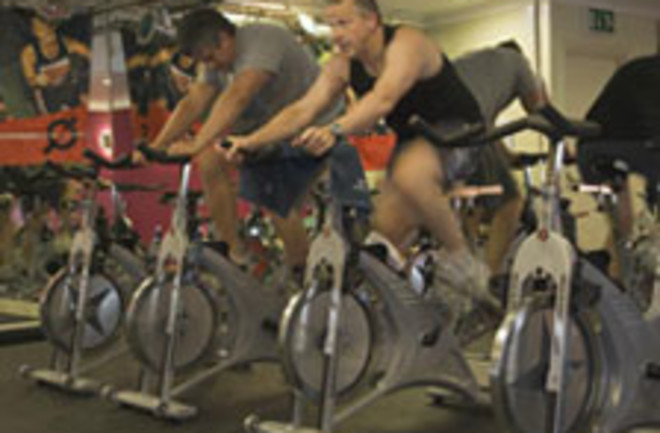 They say there's no such thing as a free lunch, but a hotel in Copenhagen lets you get closer to that goal--it just asks for sweat equity. The Crowne Plaza Copenhagen Towers wants its guests to hit the gym, pedal on special bikes, and generate power for the hotel to help it reduce its carbon footprint. If a guest generates a certain amount of energy via pedal-power, she'll be rewarded with a free meal. The eco-friendly hotel is already a carbon-neutral building that's cooled and heated by Denmark's first ground water-based cooling and heating system, and which has a facade covered with high-tech solar panels. And starting next week,The Guardian reports, the 366-room hotel will encourage guests to help out the environment by working on on new electricity-generating exercise bikes:

The bikes have iPhones mounted on the handlebars which monitor how much power is being produced and fed into the mains supply of the hotel. Any guest producing 10 watt hours or more will be rewarded with a free meal.

Getting the free meal appears to be surprisingly easy. According to the hotel's calculations, pedaling the bike for an hour would produce 100 watt hours--that's enough power to fire up a 100-watt bulb for an hour. That means that just six minutes would produce the 10 watt hours that would qualify the guest for a free meal. Some critics have scoffed that a guest who produces 100 watts of power won't make a dent in the energy consumption of this huge hotel. Supporters counter that the effort that goes into producing 100 watts of power would make people more conscious of how difficult it is to produce energy, with Alex Randall, a spokesman for the Centre for Alternative Technology telling The Guardian:

"Realistically, this isn't a practical way of generating a useful amount of energy, but I certainly wouldn't criticize it.... As a lesson, and a means of public engagement, it's excellent – if you sit someone on a bike, pedaling hard, and show them they are only generating enough to power one light bulb or TV, is makes them appreciate how difficult energy is to produce, and therefore why we should be careful not to waste it."

The bike-for-energy program is a pilot project due to run for a year. If it's a hit, the program will be rolled out to all 21 Crowne Plaza hotels in Britain. Related Content: Discoblog: Bizarre New Treadmill-Bike Lets Gym Rats See the Outside World Discoblog: Musical, Fahrvergnügen-Inspired Staircase Makes Commuters Less Lazy 80beats: Would You Pay $39.99 for an Energy-Efficient Light Bulb? 80beats: Green Makeover Aims to Cut Sears Tower Electricity Use by 80% 80beats: Windmills on NYC Skyscrapers Sound Cool, but Wouldn’t WorkImage:Wikimedia