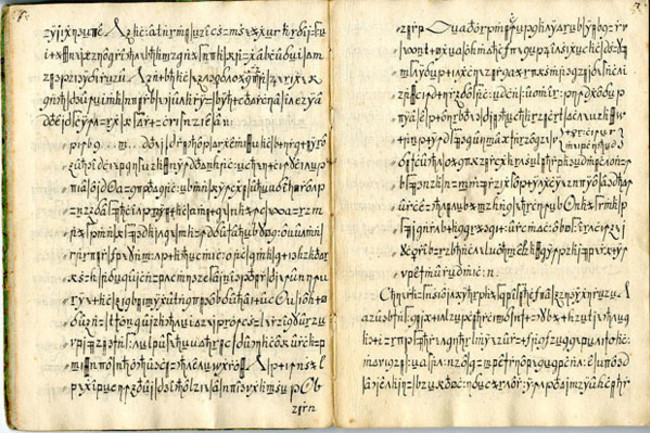 "Curiosity is inherited with mankind. Frequently we want to know something only because it needs to be kept secret." Astute psychology on the part of this secret society scribe.

With the most powerful computers ever known <insert maniacal laugh>, you'd think that modern codebreakers would have utterly smashed our forefathers' puny ciphers. Well...no. There are quite a number of antique documents that remain mysterious, despite cryptologists' best efforts. Code breaking still relies on good guesses and flashes of insight more than brute force. But brute force and clever statistical analyses can help you unravel whether that guess was right in the blink of an eye, and that's what let University of Southern California computer scientists and their collaborators unravel the text of a slender brocade-bound manuscript that had kept its secrets since the 18th century

. The first words they deciphered? "Ceremonies of Initiation." Starting out, the team had no idea what language the enciphered text was. The carefully inscribed gobbledegook included Greek and Roman letters and abstract symbols, and for a long time the team worked on just the Roman letters, but that yielded nothing. As their analysis found that German was, by a hair, the most likely of the 80 languages they'd tested---the team's primary focus, not incidentally, is automated translation---they tried to see whether the abstract symbols could be standing in for German letters. This gave them their first successes, and in short order they had most of the text deciphered, revealing it to be the rules and rituals of a German secret society of the mid-1700s. A German secret society of the mid-1700s with some very weird fixations. Potential inductees must attempt to read a blank sheet of paper, and when they fail, they will have hair from their eyebrows plucked by the master of ceremonies. Members must cover their eyes with aprons or their hands during certain ceremonies. The group describes themselves as freemasons, and the rituals make use of mallets, compasses, epees, and other paraphernalia (and lots and lots of candles). A black carpet inscribed with occult signs is spread on the floor during rituals. You know, the whole DaVinci Code drill--except for real. Read the whole thing for yourself here

. Secret societies were all the rage in Europe in the 1700s, but by their own design we have very little information about their political machinations. So while the aprons, eyes, and etc. are titillating, what's likely to interest historians most is a passage discussing the rights of man. "This opens up a window for people who study the history of ideas and the history of secret societies," one of the USC computer scientists said in a release

. "Historians believe that secret societies have had a role in revolutions, but all that is yet to be worked out, and a big part of the reason is because so many documents are enciphered." And there are plenty more unbroken codes out there to be attacked. The team hopes to tackle the Voynich Manuscript

(aptly called "the white whale of the code-breaking world

" by the NYTimes), the Zodiac killer

's encrypted messages, and the Kryptos code on a sculpture on the CIA's grounds

Image courtesy of University of Southern California and Uppsala University