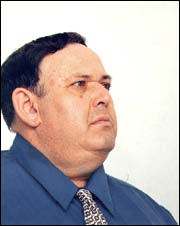 Aharon Agranat's wife wears the earrings he crafted for her with pride. The jewel in each stud is a pale green man-made crystal— potassium lithium tantalate niobate— concocted by Agranat, a 48-year-old Israeli physicist. The crystal, KLTN for short, may also revolutionize fiber optics and change the way you use the Web, transmit data, or phone loved ones.

Internet data traffic, doubling every three to four months, will soon be too great for the strained infrastructure to handle. Information often travels through fiber-optic cables as photons, particles of light. These days, one hair-thin fiber-optic glass wire carries one light beam containing 80 different wavelengths (referred to as colors), each carrying a different data stream. As traffic increases, companies are compelled to jack up the number of colors in a beam. By year's end, the standard will be 160 colors. Some carriers already foresee boosting their output to 320 or 960 colors, which means 320 or 960 phone calls, faxes, or Web searches transmitted simultaneously. Optical fibers can handle that traffic. The trouble starts when the fibers converge at intersections manned by routers, the electronic traffic cops charged with directing the signals to different destinations. That's where Agranat's crystals could prove to be a solution.

Traditional routers are electronic, not optical; they convert photons to electrons before ferrying them across that intersection— at much reduced speeds. Once they reach the other side of the intersection, electrons must morph back into photons to zip away at the speed of light. Newer routers employ disks or mirrors to propel photons across that intersection, without converting them to electrons. These routers are faster, but they still transport the entire light beam at one time. They cannot split up a fiber's cargo and send individual colors in different directions. Telecommunications executives dream of all-optical devices that are capable of working in billionths of a second. "There's a war going on now to see who's going to be the first to build one," says Agranat, who has done just that.

Agranat's Intelligent Lambda Switch will be tested in two labs at the end of the summer. The switch is an array formed from a minute dice of his patented crystal. There are no moving parts; consequently, the router can funnel light 10,000 times faster than any other router. The switch may give industry giants such fine control that they could sublet some colors to a different carrier. The key to Agranat's new science— electro-holography— is that each green slab contains a hologram, a filter programmed to catch and deflect one color only. When voltage is applied to a crystal, the activated hologram lets all colors pass through except the one it will bounce to a different destination.

A big challenge was to grow crystals that are utterly transparent, house holograms, and accept an electric charge. They're made by laboriously cooling a molten mix of the four ingredients heated to more than 2,200 degrees Fahrenheit. An ice-cube-sized crystal can be diced with a diamond saw to make 1,000 identical rectangular prisms, a process that enthralls Agranat, even though he's watched it hundreds of times. "It makes one feel a bit like an alchemist," he says, "because an entirely new entity is created, one that is, on top of its scientific and practical importance, more beautiful than gold. Imagine how excited I was when the first one came out of the furnace." Of course, some bits of that first crystal didn't end up in a router. Mrs. A is wearing them.