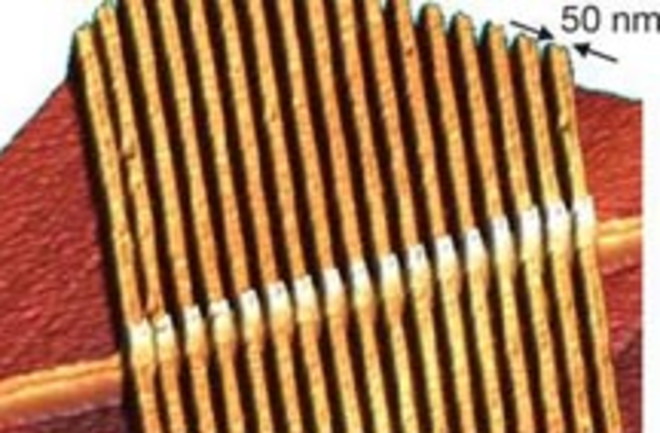 This week computer manufacturer HP announced it is teaming up with chip-maker Hynix to bring the first memristors, or memory resistors, to market within three years. Able to store information even without a source of power, memristors have been hailed as a way to keep up with Moore's Law. Moore's Law is that old adage, first uttered by Intel's Gordon Moore in the 1960s, that the number of transistors one could fit on an integrated circuit should double every couple years or so.

But industry consensus had shifted in recent years to a widespread belief that the end of physical progress in shrinking the size modern semiconductors was imminent. Chip makers are now confronted by such severe physical and financial challenges that they are spending $4 billion or more for each new advanced chip-making factory. [The New York Times]

Thus the excitement over memristors, one of the tech tricks that has the potential to meet or exceed today's chip capacity. The idea for them was first proposed nearly four decades ago, but it was just two years ago that computer scientists made memristors a reality. Earlier this year, as DISCOVER covered

, a team of some of the same HP researchers showed in a Nature study that memristors could act as both computer and memory.

Memristors haven’t yet been developed to the point where they can take the place of transistors, so they don’t fit the standard definition for Moore’s Law acceleration. But they can make more efficient use of standard silicon-based processors and could eventually take over the processing job as well. [MSNBC]

HP's Stan Williams says that Moore's Law may be due for an upgrade of its own. As the way engineers build computers changes, he says, so must the law.

“Moore's Law in itself has evolved and morphed in time," HP's Williams [said]. "It used to be the number of transistors in a chip, but now it means exponential growth in capability on a chip.... I personally don’t see any need for this exponential increase in capability to end within the next few decades." [MSNBC]

A wholly different idea to keep up with Moore came out of Rice University this week. While we hear all the time about graphene

—flat sheets of pure carbon—as the material of the future, researchers in Jim Tour's lab discovered something remarkable

about the material of the present: silicon.

Under certain conditions, an electric charge applied to tiny bits of silicon dioxide will repeatedly break and reconnect its crystals. The breaks in the crystal can be used to store information. This kind of phenomenon was noticed in the 1960s, but because it occurs on such a small scale — the nanocrystal wires are about 5 billionths of a meter wide — those researchers couldn't effectively manipulate it, Tour said. Now, as the science of nanotechnology matures, scientists are beginning to control the interactions of handfuls of electrons. [Houston Chronicle]

Tour already is talking to Texas companies about developing memory chips based on the silicon-based 3D storage his lab created. There are other promising tech candidates for keeping up with Moore's Law: Check out some of the brightest ideas in this DISCOVER gallery

. Related Content: DISCOVER: Our Brightest Hopes for Keeping Up with Moore's Law

80beats: “DNA Origami” May Allow Chip Makers to Keep Up With Moore’s Law