Color-Changing Solar Tiles Will Blow Your Mind, Heat Your House 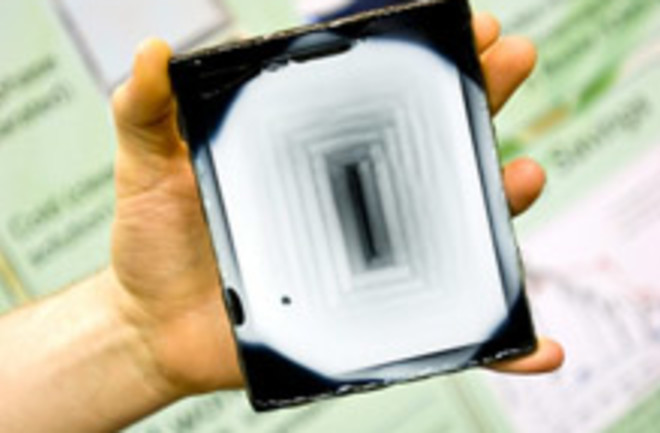 U.S. Secretary of Energy Steven Chu thinks one solution to the energy debate is obvious: turn all the roofs in the U.S. white. It's true that doing so would result in major energy savings. But even if white roofs became standard tomorrow, it would take 20 years before the energy savings equaled the greenhouse emissions we produce annually. Plus, not everyone would benefit, particularly in places where it gets so bitterly cold that having white roofs in the winter would cancel the energy savings made in the summertime. Fortunately, MIT graduates have created a solution: color changing roof tiles that adjust to the temperature of the season. The tiles turn white when it’s hot outside (or when the tile is 80 percent covered by sunlight), and black when it’s cold (or when 30 percent or less is covered by sunlight). MIT’s Web site reports:

[The tiles] use a common commercial polymer (in one version, one that is commonly used in hair gels) in a water solution. That solution is encapsulated—between layers of glass and plastic in their original prototype, and between flexible plastic layers in their latest version—with a dark layer at the back. When the temperature is below a certain level (which they can choose by varying the exact formulation), the polymer stays dissolved, and the black backing shows through, absorbing the sun's heat. But when the temperature climbs, the polymer condenses to form tiny droplets, whose small sizes scatter light and thus produce a white surface, reflecting the sun's heat.

In the future, color-changing tiles won’t be your only option for reducing energy consumption: You might also be able to grow vegetables on your roof, or even use solar panel shingles to heat your house. Related Content: DISCOVER: Building an Interstate Highway System for Energy Discoblog: Monitor Your Daily Energy UseImage: MIT