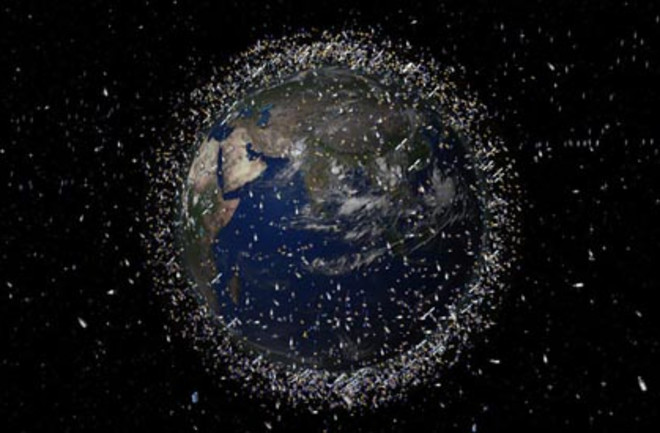 For two years, the Chinese science satellite SJ-06F flew solo orbits around the Earth (or, as solo as a machine could be in the expanding haze of space junk in orbit). But now it has a partner: Last month China executed the delicate maneuver of aligning another satellite launched this year, SJ-12, with its older counterpart. Only the United States had executed such a satellite rendezvous before this, and it shows off China's advancement in satellite sophistication. Three years ago the country blew one of its satellites to smithereens in a practice test—a test that created thousands of additional chunks of debris in orbit. The satellite meet-up is a more elegant trick, and one whose implications could be sinister or benign. Let's explore both possibilities. Don't Worry China's game of catch-up, which has its space program closing in on America's abilities in orbit, strikes fear into the hearts of some politicos. But malfeasance need not be the aim of the satellite maneuver.

"This set of skills serves a whole lot of purposes," says Dean Cheng, a Chinese policy expert with the Heritage Foundation, a think tank in Washington DC. The most immediate application, Cheng says, may be testing sensors and control systems to help pave the way for docking procedures to be used with China's first space station module, Tiangong-1, which is set to launch in 2011. "This sort of thing may very well be consistent with wanting to test drive the hardware and software before you test it on your space laboratory," Cheng says. [New Scientist]

And speaking of space junk (as we were earlier), this kind of procedure could be used in the future to clear out the defunct equipment and debris that clogs the space around our planet and threatens useful machinery in orbit. What of the worry that China could dock with our satellites

and interfere with them? Brian Weeden of the Secure World Foundation

, who I talked to for a story in the September issue of DISCOVER, tracked the rendezvous

and says that's unlikely. Weeden, whose organization is devoted to the peaceful use of space, says that there are easier ways to mess with enemy satellites, like shooting them with lasers from the ground. OK, Worry Whether or not China

is pursuing space warfare in this instance, the country is certainly trying to measure up to whatever the United States can do.

“The Chinese would be absolutely incompetent to not be trying to reduce U.S advantage in space,” James Oberg, a former NASA space engineer specializing in orbital rendezvous, tells Danger Room. “No potential adversary in their right mind would give us permanent advantage in space operations.” [Wired.com]

China might not need rendezvous capability to tinker with another country's satellites, but it would need that capability to spy on them—taking an up-close look at the competitor's product. There may be no way to gauge true intentions.

According to Oberg, the satellite meet-up occurred in an orbit almost exclusively devoted to earth observation — spy and weather satellites, for example — where “a potential adversary would be most interested in rendezvousing. On the other hand, it’s also where a satellite might need refueling,” he adds. “It’s like you could be changing a screwdriver for a hammer, or you could be turning a peaceful ‘bot into a killer one.” [Wired.com]

Related Content: DISCOVER: Space Junk: How To Clean Up the Space Age' Mess