Wherever you find science, you don’t have to look far for art. Whether it’s diatom arranging or turning algorithms into murals, artists will always add a human twist to the fruits of scientific inquiry. And their latest medium? Drones. Aerial drones are already useful for scientists and hobbyists alike, but leave it to the folks at Cirque du Soleil to figure out a way to dance with them. In the new short film “Sparked,” man and drone prove that state-of-the-art technology can seamlessly blend into a magical choreographed performance.

"Sparked" was produced through a collaboration with scientists at ETH Zurich and Verity Studios, who have been studying the dynamics of flying machines for well over a decade. They’ve created algorithms that precisely control and synchronize packs of flying drones. (And as you'll see in the video below, we’re talking drones that can juggle and build things.) 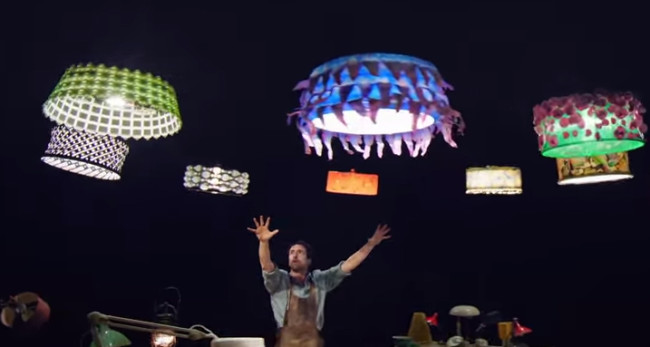 Screenshot from "Sparked" With the technology in place, the creative types took over. They attached mannequin heads, lampshades and lights to drones to see how they looked. In the end, the directors settled on lampshades and wrote a script which the engineers then choreographed into a perfectly-repeatable sequence of flying actions. The result, below, is a playful, magical short film that belies its technical prowess. As IEEE Spectrum points out, this isn't the first time drones have been co-opted for artistic purposes:

Quadrotors began to take part in artistic performances several years ago. Dance company Pilobolusand Daniela Rus's group at MIT have been collaborating in different routines since 2011. Now Verity Studios is joining the likes of KMel Robotics and (if they can make it actually happen) Disney Research in starting to commercialize artistic quadrotor performances.

All we can say is, it's about time. After years of drones being the lowly cameramen for our antics and stunts, now they're finally taking a starring role themselves.