A pen that allows you to create electronic circuits on printer or photo paper. 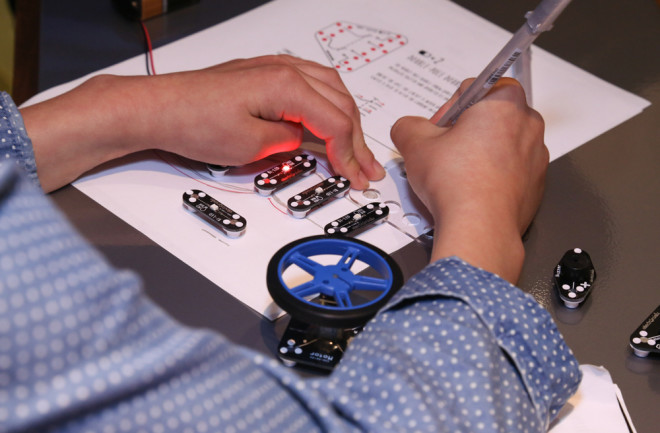 Filled with conductive ink, the Circuit Scribe pen can be used to draw circuits on paper, allowing makers of all ages to light up (literally) their ideas. | Lori Sanders

Nifty and cheap,Circuit Scribe looks like an ordinary roller ball pen. But its ink is a conductive silver that dries instantly, allowing users to create electronic circuits on printer or photo paper.

The pen is the brainchild of Analisa Russo. In 2010, while pursuing a doctorate in materials science and engineering at the University of Illinois at Urbana-Champaign, Russo wanted to give ordinary people access to advanced industrial materials, including the conductive inks used in 3-D printing. Those inks are expensive and don’t dry quickly, so Russo created a workaround, filling a regular roller ball pen case with an ink she developed.

Initially, she thought it could be used to create mock-ups and product prototypes. But then Russo and two fellow graduate students, Brett Walker and Michael Bell, realized its potential in schools, from light-up textbooks to DIY circuitry projects for kids as young as elementary school age. Outside the classroom, think light-up birthday cards and scrapbooks, even homemade night-lights.

Electroninks, the company Russo started with Walker and Bell, now sells a few different Circuit Scribe kits ($25 and up) with components geared to different projects and levels of complexity, including light and sound. The company is also working with schools and museums in Massachusetts and Illinois to spread the circuit love. Russo plans to expand the product line, too. She won’t say how, but she does admit the company gets a lot of calls from tattoo artists.