China Unveils the Fastest Supercomputer in the World. Should We Panic? 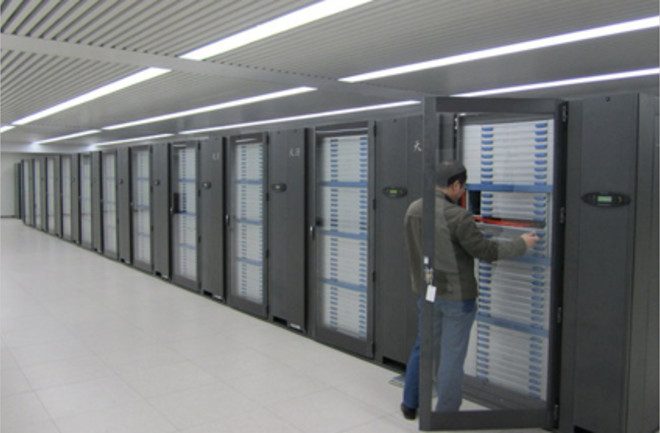 This week China unveiled a new supercomputer that's pretty darn quick. The Tianhe-1A machine housed at the National Supercomputing Center in Tianjin reportedly works at the rate of 2.5 petaflops (a petaflop being about a thousand trillion operations per second), and reportedly will take the top spot in the rankings of world supercomputers when the people who attend to this list release the new version next month. That will bump the top U.S. machine down to number 2. Personally, I'm not going to panic until China leapfrogs the United States on the Princeton Review list of top party countries or People Magazine's sexiest countries in the world. But the announcement brought talk of American unease about being bested by China, and American alarm over China's growing technological expertise. So is the vague, festering worry about the Chinese supercomputer justified? Let's look at both sides of the argument. Yes Putting aside the issue of our wounded national pride, some experts say the real concern is whether the United States has the organization to match what China has done. CNET interviewed Jack Dongarra of Oak Ridge National Laboratory, keeper of the former fastest supercomputer, who called China's achievement a "wake-up call."

You have to remember that you have to not only invest in the hardware. It's like a race car. In order to run the race car, you need a driver. You need to effectively use the machine. And we need to invest in various levels within the supercomputer ecology. The ecology is made up of the hardware, the operating system, the compiler, the applications, the numerical libraries, and so on. And you have to maintain an investment across that whole software stack in order to effectively use the hardware. And that's an aspect that sometimes we forget about. It's underfunded. [CNET]

Simply, the United States' supercomputer hegemony may not be possible to maintain.

“What is scary about this is that the U.S. dominance in high-performance computing is at risk,” said Wu-chun Feng, a supercomputing expert and professor at Virginia Polytechnic Institute and State University. “One could argue that this hits the foundation of our economic future.” [The New York Times]

No Tianhe-1A may be of Chinese design, but it is not completely of Chinese origin.

Most of the Tianjin system relies on chips from Intel and Nvidia, which are both based in Santa Clara, Calif. So U.S. customers could presumably construct a system with similar performance, noted Horst Simon, deputy lab director at Lawrence Berkeley Lab. [Wall Street Journal]

And while Feng may be right that this story touches a nerve wired to our economic future, the focus on a particular machine may be misguided. As Boston University computer science professor Azer Bestavros tells Forbes

"It may be a matter of national pride (and, as a result, an effective mechanism that some may use to siphon funding from Congress to subsidize HPC research), but the much more important question is whether we are investing in the education and training of the next generation of computer scientists who will use the power from such machines. Meantime, the emphasis on the performance of a single machine is a bit misleading. Today, we are increasingly moving towards more distributed forms of computing, including the use of grid and cloud computing infrastructures." [Forbes]

It's not the end of the world, but don't tell the government Champions lose their crowns. Challengers come along, take the title, and the former champ joins the ranks of the challengers plotting to retake the top spot. So the jingoistic hand-wringing may not be totally justified, but it is useful. Just look at what happened the last time the United States lost the title.

As Bestavros says, being surpassed by China may well elicit a similar response, with Congress loosening the purse strings for computing research to try to beat back the competition. Good. Related Content: DISCOVER: Beautifully Detailed Supercomputer Simulations

(Photos) DISCOVER: Whose Computer Is Fastest of All?