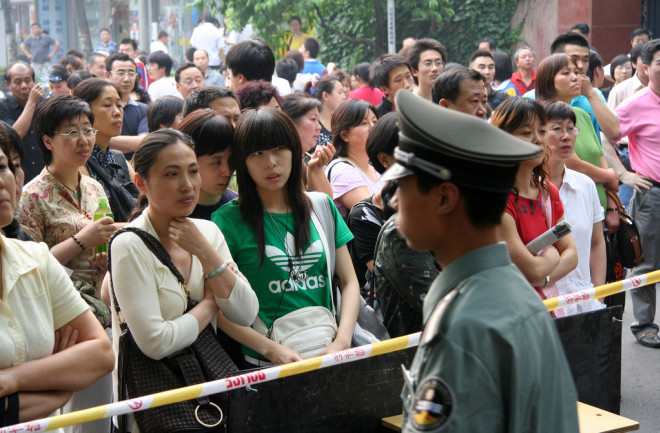 Parents wait for students to exit the exam area in China. (Credit: Ernie/Flickr) Students taking college entrance exams in China will have to peek left, right, and toward the sky if they plan on cheating. That’s because test administrators are deploying a drone to spot cheaters during these highly competitive exams. The six-propeller drone flew over two testing centers in Luoyang city to monitor radio signals during the two-day exam period, which 10 million Chinese students participate in annually.

Entrance exams in China determine which tier of university a student can enter. And they are no walk in the park: The stakes are so high for students that some resort to suicide when they can no longer bear the pressure to succeed. With the stakes so high, students often resort to high-tech solutions to cheat the exams. Students have been caught wearing glasses with cameras to capture images of the test, send them to an off-site location and get the answers fed back to them. Students have also hidden radio receivers in pens, plastic bottles and clothing. Since late May, China’s Education Ministry said, 23 people have been arrested for attempted cheating.

Therefore, China’s cheat-prevention drone doesn’t use cameras but rather a scanner to detect radio signals from electronic devices. When the drone detects a radio signal, it sends back a location to operators, and they try to zero in on the source. Cheaters who are caught can be prohibited from taking the test again for up to three years. It isn't known if the new cheat-detecting drones caught anyone attempting to undermine the system this year.