In the coming decade,  online primaries and elections might loosen  America’s gridlock politics. 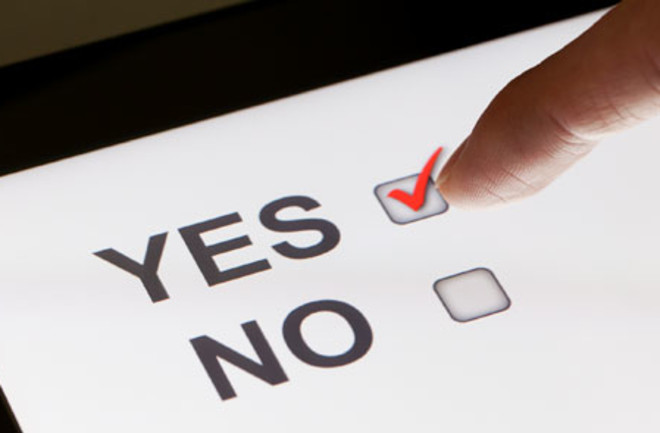 Feuding between Democratic and Republican leaders has rendered the U.S. government nearly dysfunctional, with the summer 2011 deficit standoff only the most egregious recent example of gridlock run amok. As growing numbers of Americans say they are fed up with both parties, the door would seem open for an alternative. Historically, third parties have failed miserably: Ross Perot, the most successful independent presidential candidate in modern times, did not win a single state in 1992. Technology is changing the electoral rules, though, inspiring reformers to envision a new and more open brand of politics, one built around online voting and Facebook-style campaigns.

For a brief, shining moment last spring, it seemed as if that revolutionary concept might take hold in the United States. Americans Elect, founded and initially bankrolled by billionaire venture capitalist Peter Ackerman, launched plans to create a virtual third party via a nomination process that would take place primarily online. By culling centrist candidates from both U.S. parties, it would defuse the extremism that makes governing the country so difficult. At least that was the theory. In reality, so few of Americans Elect’s delegates bothered to participate that by May the party gave up on playing a role in the 2012 election.

But that does not mean an online party can’t work. A number of experts contend that in spite of some real roadblocks, virtual parties are likely to gain greater traction in the coming decade. Hans Klein, who researches online democracy at the Georgia Institute of Technology, notes that the online election model works in the high-profile global selection of board members for the Internet Corporation for Assigned Names and Numbers, the organization that controls web domain names. Why not apply it to national politics and to the formation and operation of political parties? “It’s a lot easier to find people with collective interests and to sign them up and count their opinions online,” Klein says.

Such a turn toward open-source politics could help re-democratize democracy, argues Joshua S. Levine, the former chief technology officer of Americans Elect. In particular, the online world offers a way to bypass the byzantine nomination process for online and traditional parties alike, replacing it with a system that makes people more likely to weigh in, to make informed decisions, and to end up with a candidate who genuinely represents their viewpoints. “My parents voted by picking one of the two parties and then agreeing with whatever it decided,” Levine says. “But because of the online world, people are much more granular today in their choices.”

Levine foresees an online nomination process that requires candidates to answer multiple-choice questions on a range of issues—and then graphically shows each voter how the candidates’ stances match up to the voter’s own, as measured by the same questionnaire. Throw in videos of the candidates explaining their positions, along with biographical material, and voters will have a clear picture of the field that cuts through the noise of attack ads and the 24-hour news cycle. Then they can go straight to a “vote” page and render their verdict. “Today people walk into a voting booth and see 10 candidates’ names, and they might not have a clue about their positions,” Levine says. “Online they can vote with the research right in front of them.”

Equally important, online voting could improve on the current primary process, that peculiar patchwork of staggered state elections that typically suffer from low voter turnout. Candidates have to tailor their messages to small numbers of voters in the early primaries, so a few thousand people in New Hampshire and a handful of other states have a disproportionate influence on the direction of the presidential race. Voters in states whose primaries come later often have no real say in the selection.

A much fairer way to pick candidates, Levine says, would be to hold a series of national primaries that narrow the field as views about the candidates evolve and coalesce. That would be out of the question using today’s voting system, given how hard it is to get voters to the polls for a primary. Conducting primaries online could make voting convenient enough to lift the participation rate—and digital voting would make it easier to find information needed to make an informed decision.

There are no insurmountable technical barriers to online primaries, Levine notes. Servers can handle millions of clicks. And beyond requiring voters to verify their identity, security should not be a concern. Online voting safeguards are already sophisticated, and it is hard to imagine anyone organizing massive primary vote fraud on a national scale.

given the advantages of digital elections, many political reformers were deeply disappointed when Americans Elect failed to select a candidate. Certainly the virtual party got off to a promising start: It raised $35 million, signed up 400,000 “delegates,” and spent some $15 million to gather the physical signatures needed to place its presidential candidate on most states’ ballots. Yet the effort to ignite voter interest fell flat. In May the party had to cancel its first planned round of online voting because no candidates could muster a mere 1,000 Facebook-style “likes” from each of 10 states, a requirement for making it to the voting rounds. The top-ranking declared candidate was former Louisiana governor Buddy Roemer, who had a bit more than 6,000 clicks of support across the entire United States—about one-eighth as many nods as Jon Huntsman, the worst-performing mainstream Republican candidate, received in the New Hampshire primary.

One reason for the flop is that Americans Elect lacked some of the powerful tools that are wielded by the major parties, contends Andrew Rasiej, who advises Democrats on the technology of politics. “Americans Elect doesn’t have the massive databases to build a get-out-the-vote campaign,” he says. “Without them, you can’t target voters around their interests, extract money from them, and get them to the polls.”

In principle, not having to do those things is the point of a virtual party. But the current political system is designed by the major parties to ensure that upstart groups struggle to gain a foothold, asserts Darrell West, of the Brookings Institution’s Center for Technology Innovation. “The political barriers are much greater than the technological ones when it comes to establishing a third party,” West says. “The key to having a viable campaign is to get into the televised debates, but getting in requires polling at 5 to 15 percent in national major polls. And even with the Internet, that can’t happen without attention from the national media, and they treat third parties as curiosities.”

The political barriers are much greater than the technological ones when it comes to establishing a third party.

That may be changing. Online initiatives already have a big impact on politics: The Tea Party initially grew online, and the Occupy Wall Street movement began as a blog post. “We’re seeing an entirely new political media ecology that’s transforming politics and threatening the traditional political parties,” Rasiej says. The system may throw roadblocks in the way of a virtual third party, but online connectivity can fuel the sort of outrage that pushes the major parties to listen, much as the Tea Party forced Republican candidates to shift their views on taxes and deficits.

Levine, for his part, says the advantages of moving at least the nominating process into the online world are so strong that some party will find a way to make it work. “I think it will happen by the next election, or the one after that,” he says. It may even be Americans Elect that pulls it off. A spokesperson says the party could field candidates in upcoming gubernatorial and senate races. Maybe the journey to a new kind of politics just needs to begin with smaller steps.

David H. Freedman is a DISCOVER contributing editor and the author of Wrong: Why Experts Fail Us.