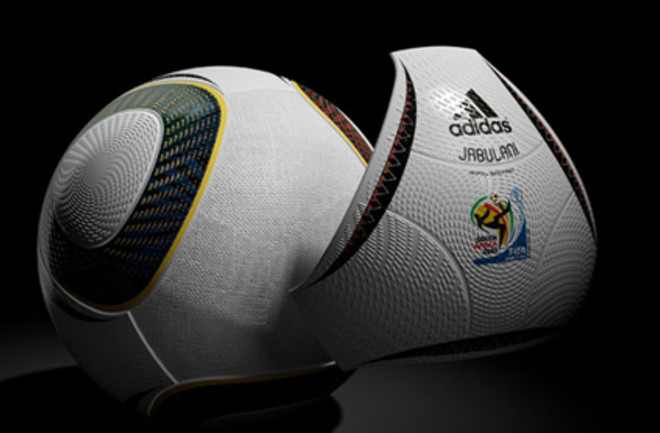 Players complaining about the new ball: It's one of the traditions that returned like clockwork with this World Cup, along with egregious diving, English misery, and American fans perking up when the team performs and then swearing off soccer for another four years when USA crashes out. But while equipment discontent typically fades as the tournament enters its final stages, anger toward World Cup 2010's Jabulani ball won't subside. So Caltech scientists decided to find out for themselves: They took the ball into their lab's wind tunnel to see if it's really so bad. If you've spent any time kicking around a soccer ball, you'll remember that it isn't a perfect sphere, but rather is made of geometric panels with grooves in between. But while a traditional ball contains 32 panels, the Jabulani contains only 8, which made the team led by Beverly McKeon suspect there could be something to the complaints about its erratic behavior.

Consider the history of the golf ball, which was smooth back in the mid-1800s. "The Scots learned the hard way," McKeon said. The addition of dimples made for a rougher surface but a narrower wake and less drag, which contributed to straighter, longer trajectories. To some degree, the Jabulani represents a shift in the opposite direction, even with tiny ridges covering its skin. Caltech's study suggests that it starts with a smooth — or laminar — airflow, shifts to something more turbulent, then shifts back again [Los Angeles Times].

) could be responsible for the odd reactions we've seen from goalkeepers in this World Cup, like English 'keeper Robert Green's notorious misplay

against the United States.

"So as the goalkeeper sees the ball coming, it suddenly seems to change its trajectory," McKeon said. "It's like putting the brakes on, but putting them on unevenly" [Los Angeles Times].

Altitude also could be adding to the Jabulani's misbehavior. That's the defense coming from Erik Van Leeuwen of Adidas, the ball's manufacturer.

Six of the 10 World Cup stadiums are above 1,200 meters (3,937 feet), where the air is thinner. That may be affecting the Jabulani’s movement, Van Leeuwen said. A ball kicked at altitude travels 5 percent faster than one kicked in Durban, which is at sea level, he said [Bloomberg].

FIFA, soccer's governing body, says it's aware of the concerns about Jabulani. But for at least the rest of this tournament, players are going to have to get used to it—or blame the ball if they lose. Related Content: Discoblog: Vuvuzela vs. Sound Engineer: Has the World Cup Stadium Horn Met Its Match?