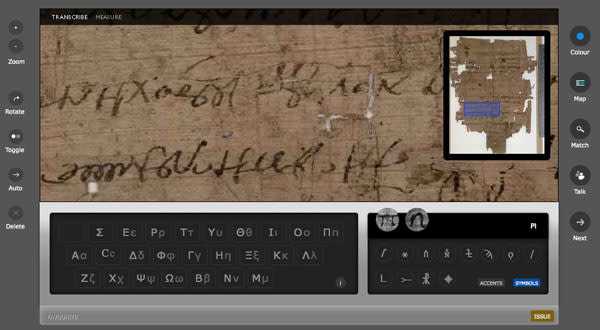 Is that an alpha or a beta?

Sometimes you need a little help from your friends. Taking a leaf from reCaptcha

in a bid to have web users transcribe the fragments, which come from a lost city known to its inhabitants as the City of the Sharp-Nosed Fish. The papyri were discovered in the early 20th century, and among them have been a lost version of the gospel, in which Christ exorcises demons, and literary works by Euripides and others. But other texts in the cache, which dates from an era three centuries after the birth of Christ when Egypt was ruled by Greeks, appear to consist of household notes, records of contracts, and other mundanities (including a loan taken out by a sausage maker), prompting the team to call their project Ancient Lives. Want to find out what else was going on in 300 AD Egypt? Just zoom in on a scrap, type out the Greek letters, and click save---once they are transcribed, translators can get to work. Join in here