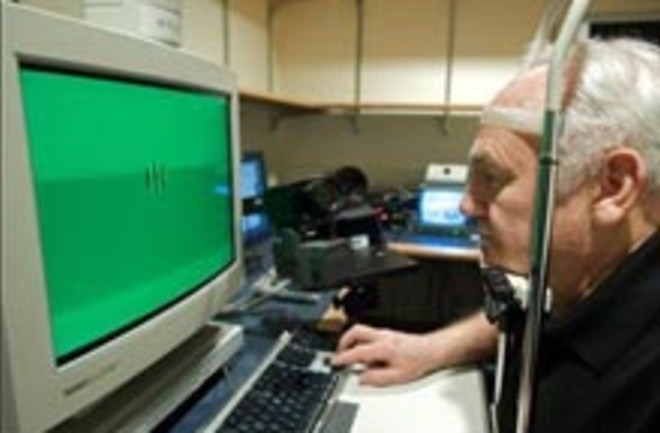 when a person with vision loss senses something they cannot actually see [Reuters].

Lead researcher Krystel Huxlin explains that people with blindsight may not be able to consciously perceive a visual stimulus, yet when they're forced to answer questions about it their answers are often correct. Researchers studied patients whose strokes had damaged their primary visual cortex, and whose impaired vision limits some everyday activities like reading and driving.

"This is a type of brain damage that clinicians and scientists have long believed you simply can't recover from. It's devastating, and patients are usually sent home to somehow deal with it the best they can" [CBC]

In the new study, published in the Journal of Neuroscience, the patients

stared at a small black square in the middle of a computer screen while every few seconds a group of about 100 small dots appeared on the screen somewhere in the area relevant to where the person’s vision was damaged. The patients’ brains initially couldn’t process that the dots were present, although their eyes were taking in the information [Bloomberg].

Researchers asked the patients to guess whether the dots were moving left or right, and found that at first the patients had a success rate of 50 percent, consistent with random guessing. But after the vigorous training regimen in which the patients practiced the exercise for 15 to 30 minutes each day for nine to 18 months, that success rate jumped to 80 or 90 percent. Huxlin says that other regions of the brain that usually handle motion perception probably began to pick up the slack and perform the functions of the primary visual cortex.

"Basically, it is exercising the visual part of the brain every day. It is very hard work, very gruelling. You are helping the brain redevelop" [Telegraph]

, she says. The benefits were so dramatic, Huxlin adds, that several of the test subjects were able to resume driving or start doing their own shopping again.

“This should become just as routine as physical therapy,” said Huxlin.... “My hope is down the road that this will be freely available” [Bloomberg].