The ESA's new system is designed to counter the force of sunlight on a spacecraft—about the same as the force of gravity on a single human hair. 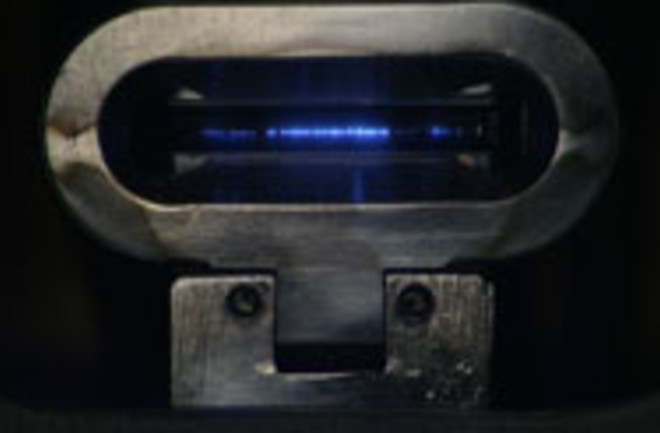 It takes huge blasts of rocket power to free spacecraft of Earth’s gravity, but only a tiny nudge to correct a satellite’s orbit, dodge space debris, or counter the slight but pernicious force of sunlight. Two new engines should make that job easier.

Most thrusters use chemical reactions to move a craft in orbit. In his new design, Oleg Batishchev, a plasma physicist at MIT, instead uses electromagnetic waves to ionize a gas into plasma that is ejected to provide a little rocket blast. The Mini-Helicon Plasma Thruster has only three basic parts: a tube holding compressed nitrogen; an antenna (a Coca-Cola can in the most recent prototype) emitting radio waves that ionize the gas; and magnets guiding the plasma.

Batishchev’s engine could someday provide an inexpensive way to prod satellites, but it is far too powerful for the purposes of Davide Nicolini of the European Space Agency (ESA). His Field Emission Electric Propulsion (FEEP) system produces the smallest thrust of any space engine ever: It is designed to counter the force of sunlight on a spacecraft—about the same as that of a single falling human hair. The system ionizes liquid metal cesium and ejects little batches of ions to provide propulsion.

The ESA plans to build FEEP into the LISA Pathfinder, a spacecraft designed to detect gravitational waves while stationed at Lagrange point L1, where the gravitational fields of Earth and the sun cancel each other out. Twelve FEEP thrusters will counter the force of sunlight and other minute cosmic perturbations, keeping the spacecraft orbiting the sun exactly in tandem with Earth.