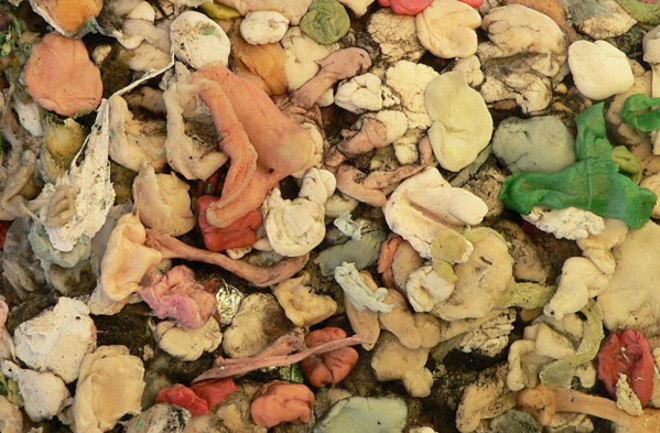 Every year, 935 million packs of gum are chewed by 28 million Britons, leaving millions of sticky, inconvenient lumps in their wake. The globs can only be removed with high pressure steam hoses, expensive freezing machines, or corrosive, environmentally unfriendly chemicals, costing taxpayers £150 ($300) million per year. The desperate state of affairs has attracted millions of dollars of research into non-stick chewing gum, but the country wants a quicker solution. Naturally, when a group of biochemists from the Unviversity of Manchester were sitting around "having a couple drinks" (likely devising a number of grandiose schemes for saving the world), the conversation turned to Britain's chewing gum crisis. Before long, the team realized they could use their biotechnology know-how to "really make a difference." They realized that certain types of enzymes can break up molecules, and could thus be used to separate gum from places like hair and sidewalks. But there's a major problem with the enzyme/chewing gum combo: They don't mix. Enzymes function in liquid environments, while gum is made from synthetic latex, which repels water, rendering the enzymes impotent. A group of researchers from Queen's University, Belfast, then stepped in to save the day. They came up with the idea of using ionic liquids—biodegradable organic salt solvents—as the enzymatic solution. Organic solvents are both liquid- and fat-soluble; as such, they could both be a basis for the enzyme solution and bring the enzymes to where they need to be—inside nasty gum blobs. The two groups combined forces, and are now testing combinations of various ionic liquids (all of which are biodegradable) with different types of enzymes. They expect to bring a product to market in about a year.