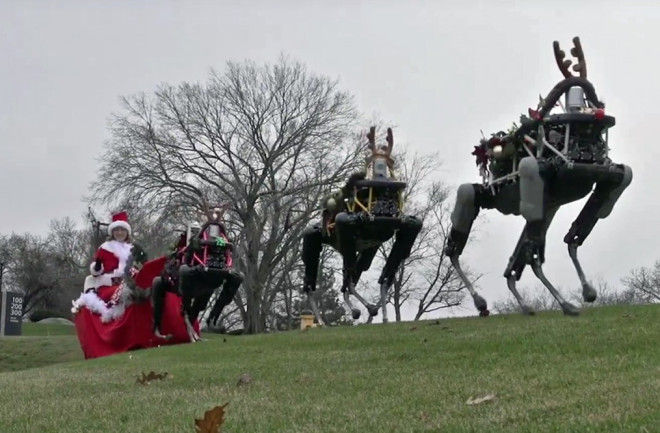 Spot robots pulling Santa's sleigh. (Credit: Boston Dynamics) In addition to toys and goodies, Boston Dynamics' Santa Claus — or, perhaps, Krampus — is bringing nightmares to all the good little boys and girls. To ring in the holiday spirit, folks at the Google-owned robotics company hitched three of its Spot bots to a sleigh, and then pranced through the business park laughing all the way. Sure, the antlers and Santa costume added a festive touch, but it’s tough to ignore the creepy, even terrifying, undertones coursing through this short clip.

But it isn’t all fun and games for these four-legged robots — they’re built for grunt work. Spot is a smaller version of the company’s DARPA-funded BigDog, which was built to travel across rugged terrain in the toughest environments on the planet. BigDog is powered by a hydraulic actuation system and uses onboard sensors to navigate its environment. The metallic, headless beast can shoulder a load of up to 340 pounds and basically serve as a pack mule for the military. If you think of BigDog as the fullback on a football team, then Spot would line up as a wide receiver. The smaller robot weighs 160 pounds and is faster, lighter-footed and more agile than BigDog — you can even kick Spot (why would you) and it will dynamically adjust to keep its balance. Spot may someday serve its country as a battlefield scout, and earlier this year the Marines tested Spot’s soldiering abilities in field trials.

Boston Dynamics is more than capable of taking holiday horror to a new level. In addition to trotting out robotic reindeer, Santa, too, could be replaced by a soulless machine. Atlas is the company’s humanoid robot that can lift heavy things, climb with its hands and feet and even use tools. Atlas was overhauled in January 2015 prior to the DARPA Robotics Challenge, and the robot guided Team IHMC to a second-place finish in the June competition.

Atlas strikes a pose. (Credit: DARPA) Atlas in a stocking cap is probably enough nightmare fuel to keep a would-be mischief-maker on the nice list.