Boozy science: molecular fingerprinting can tell the difference between rum and cachaça. 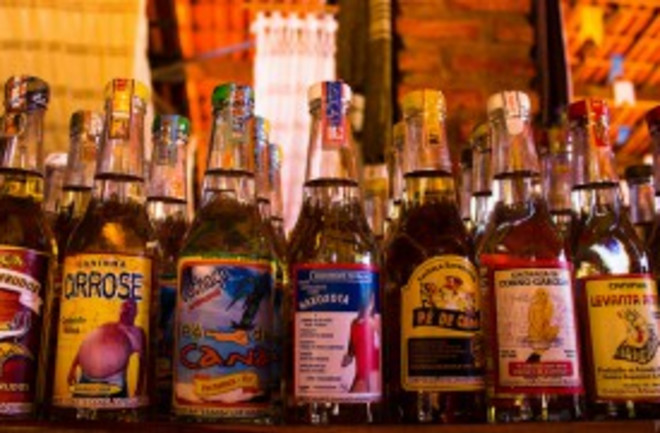 If you don't know what rum is, it's probably time you get out of that hole you've been living in. But not everyone is as familiar with cachaça, a related liquor popular in Brazil. Like rum, it comes in both light and dark barrel-aged varieties, but instead of being made from molasses (as are most rums), cachaça is made from whole sugarcane juice. However, because some rums are also made from sugarcane juice, and historically cachaça has been called "Brazilian rum", there is plenty of room for confusion and mislabelling. So what is a picky cocktail weenie to do? Well, according to this study, mass spectrometry can be used to identify molecular fingerprints that can differentiate artisan barrel-aged cachaça from rum. Pirates everywhere, rejoice! (If you have a mass spectrometer, that is!)

Differentiation of rum and Brazilian artisan cachaça via electrospray ionization mass spectrometry fingerprinting. "Rum and cachaça are sugarcane distillates produced on large scales and of similar composition, and their differentiation is currently a subject of commercial dispute and a challenging analytical task. We have investigated the ability of direct-infusion electrospray ionization mass spectrometry in the negative ion mode, i.e. ESI(-)-MS, to distinguish between samples of these distillates. ESI(-)-MS fingerprints were collected for some samples of Brazilian artisan cachaça, aged in two types of wooden casks, i. e. amburana (Amburana cearensis) and jequitibá (Cariniana estrellensis), and of commercial rum. The mass spectra were found to be very distinctive, showing sets of diagnostic ions for each type of sample, i. e. (1) cachaça aged in amburana (m/z 271, 313, 377) and jequitibá (m/z 171, 255, 455) casks; and (2) commercial rum (m/z 89, 97, 179, 255, 283). When applied to the ESI(-)-MS data, principal component analysis and hierarchical cluster analysis split rum and cachaça samples into well-defined groups. Moreover, the two types of cachaça samples aged in wooden casks of amburana or jequitibá were also split into two distinct groups. Direct-infusion ESI(-)-MS can therefore be potentially applied to the rapid, simple, and accurate differentiation of these commercially important sugarcane distillates." Related content: NCBI ROFL: Beer goggles proven to exist; "beer before liquor, get sick quicker" hypothesis remains untested. NCBI ROFL: A field study of bar-sponsored drink specials and their associations with patron intoxication. NCBI ROFL: Want worse hangovers? Drink bourbon!